I’ve been looking to get a second Brompton for a while, both as a lighter weight option for quick rides and also just to have another bike if I have company in town.  I’ve been riding a few S-bars and felt at home on them.  I bought Mondrian at MetroGnome Music and Cycle to Go.

Mondrian started life as a S2L Brompton, but I took off the fenders and made it a S2E.  I had seriously considered making it a single speed, but decided against it.  The main frame is red and the extremities are cobalt blue, which match the colors of the University of Arizona very well.  When Todd from MetroGnome was doing his initial order way back during the Brompton US Championships I suggested this bike configuration, with the idea in the back of my mind that if it didn’t sell I would pick it up.  I added the sunflower yellow saddle from Brompton that I had bought a week earlier, which should make it pretty unique. 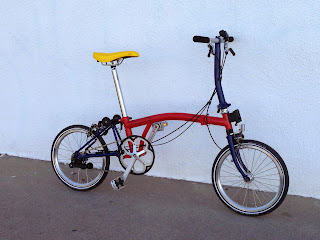 I had originally planned to call this brommie Wilbur, after the UofA mascot, but decided on Mondrian.  Why Mondrian?  Check this out…

Piet Mondrian was the father of cubism a cubist a cubism-influenced abstract expressionist, which seems appropriate since the Bromptons look very cube-like when they’re folded up.  Also, MetroGnome’s building was influenced by Mondrian. 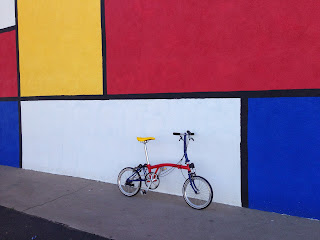 I already have a few plans for Mondrian, most urgently is installing some Ergon grips and perhaps cutting the handlebars narrower.  I’m also going to try to find a small Wilbur sticker to decorate it just a little.