Remember when I mentioned over the holidays that Bromfoot creator Jeff Guida had something cooking?  Well, Jeff’s finally allowing me to share what it is!  It’s ShareRoller, a portable electric friction drive system for several types of bikes, including Bromptons!  The unit resembles a very small suitcase and weighs about 6 or 7 pounds. 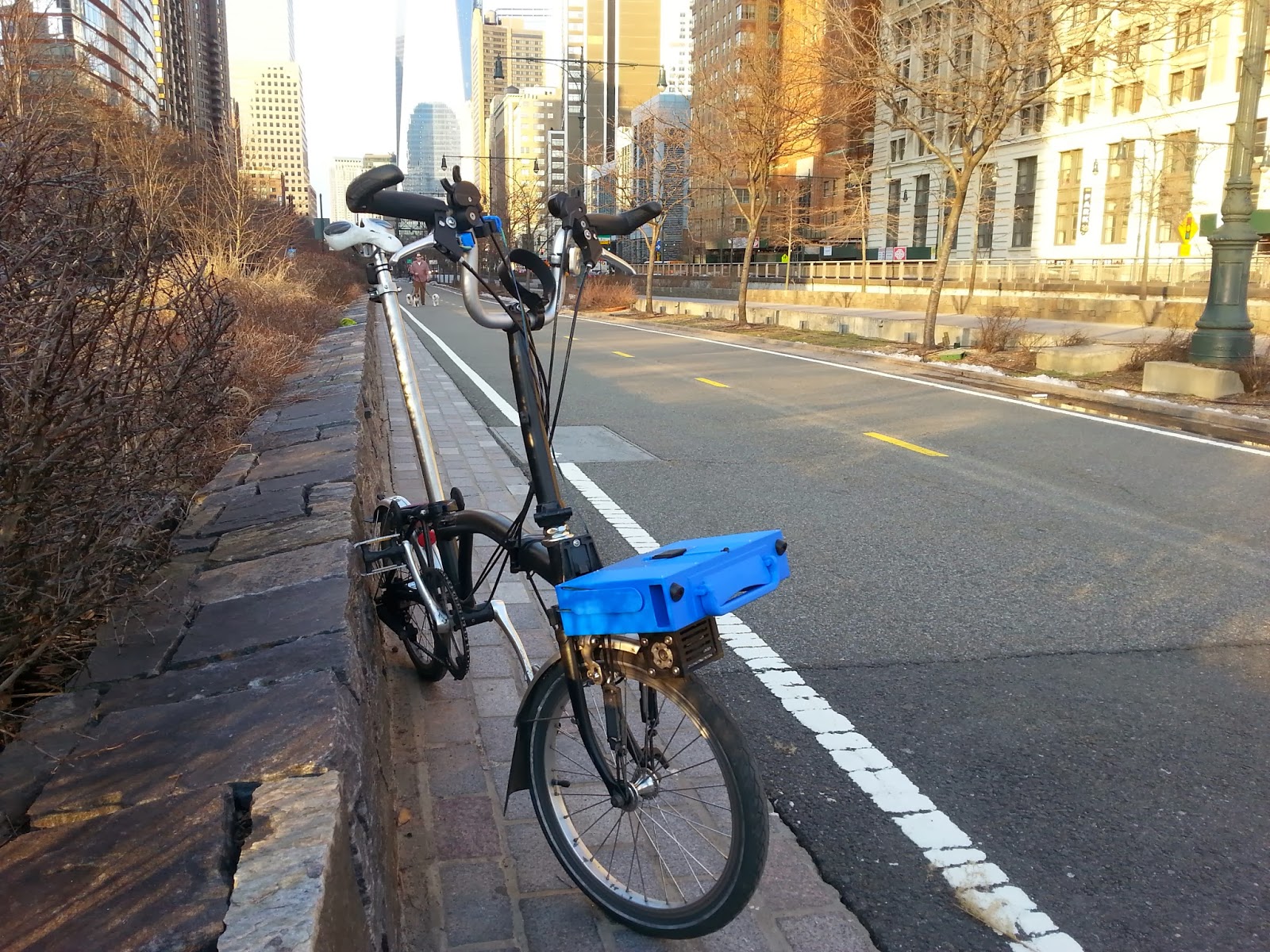 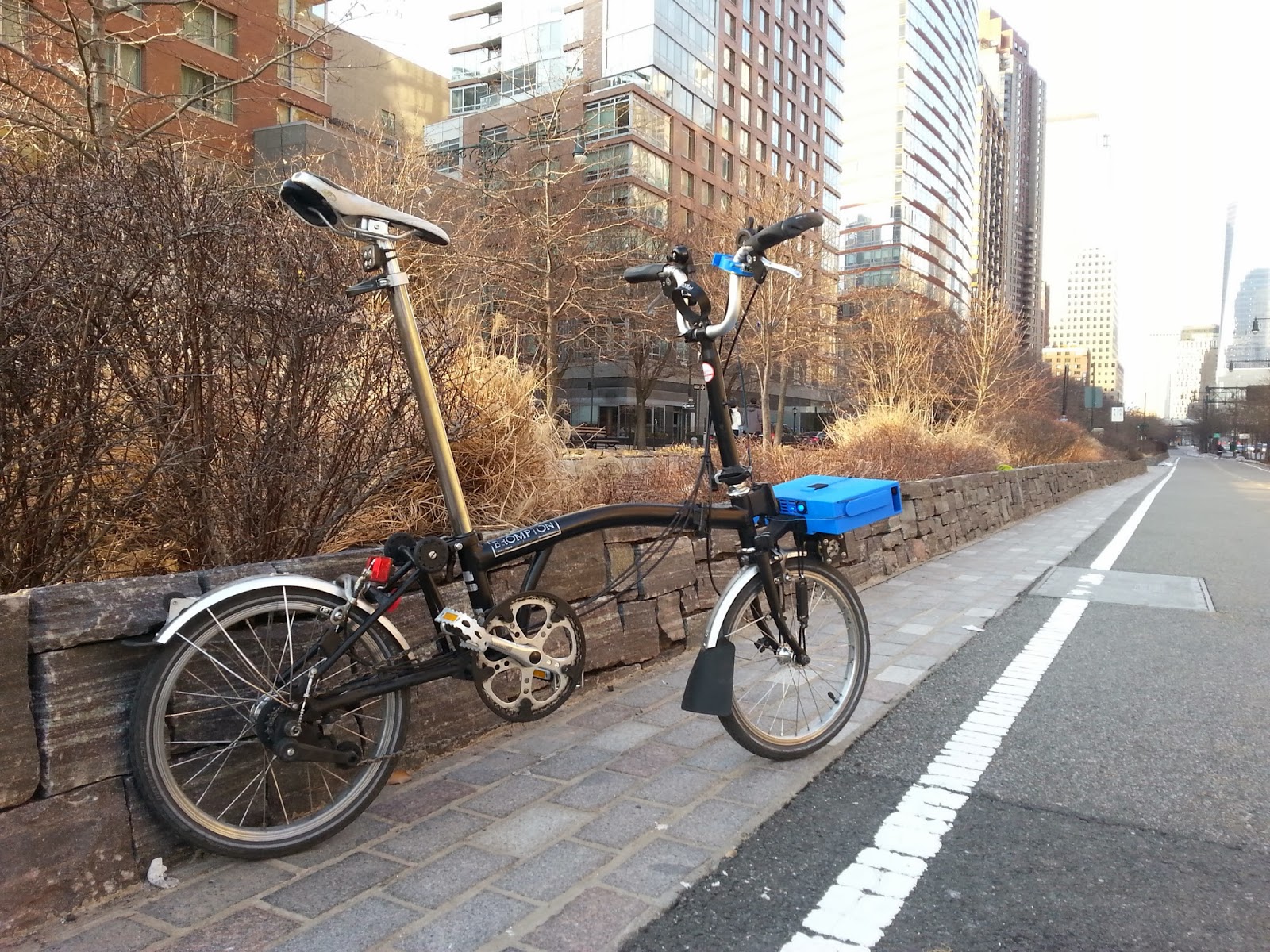 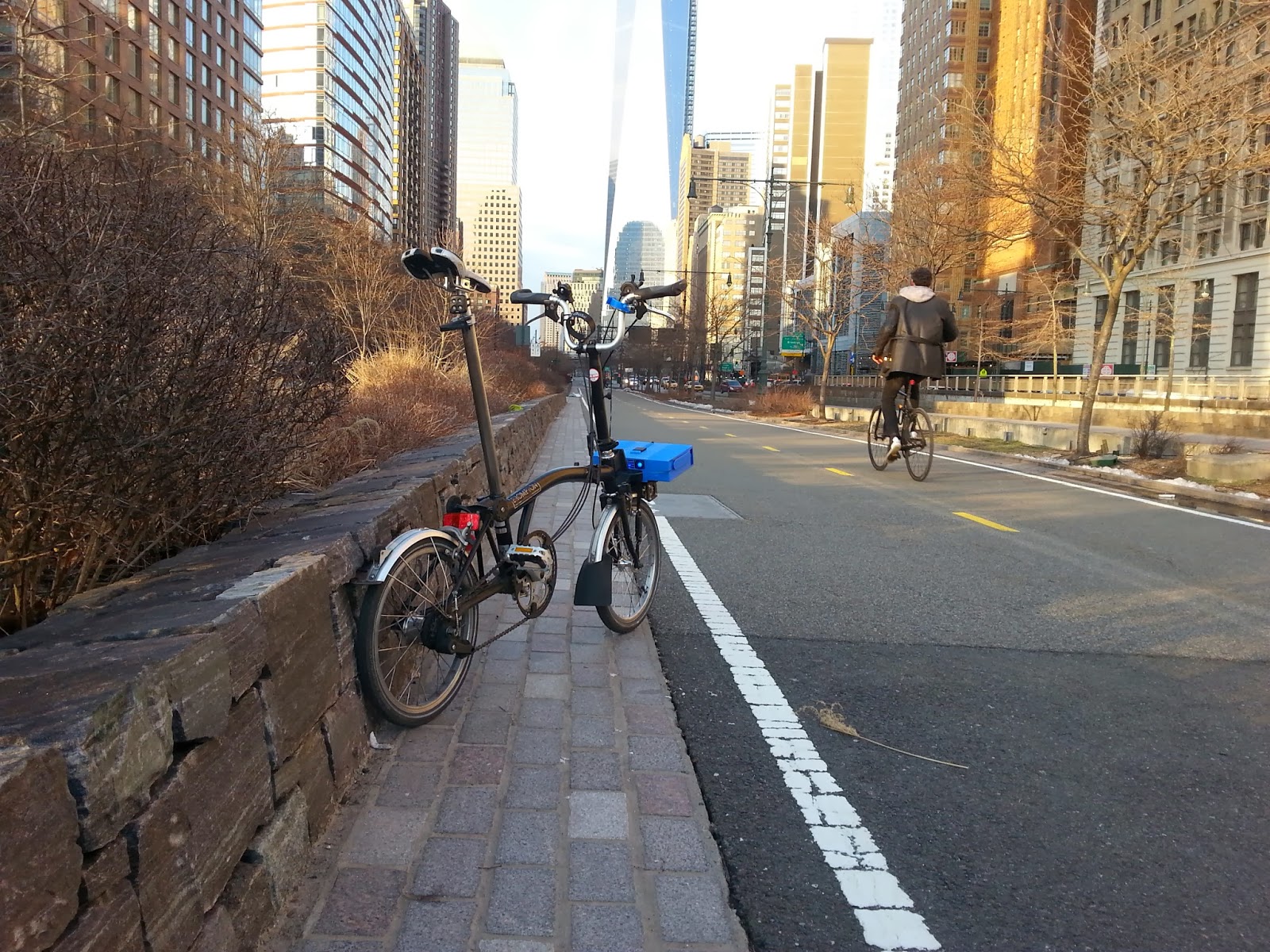 The ShareRoller is primarily designed for bicycles used in major metropolitan bike share programs, such as New York City’s Citibike and Washington D.C.’s Capital Bikeshare.  The bikes used by those programs are super stout and very heavy… it is hard to imagine a lighter weight person pushing one those.  I weigh around 175 lbs. and I had a tough time getting much speed on a Citibike.

For the Bromptons, Jeff designed an adapter block so that the ShareRoller can be used with your typical Brompton luggage options (C-bag, S-bag, etc.).  The adaptor block weighs about half a pound and is designed to not impede the folding of the Bromptons (Note:  it’s not certain yet whether Bromptons with dynamo hubs will be able to use the ShareRoller due to the location of the lights.  Jeff didn't have access to a dynamo hub equipped Brompton during the development of the ShareRoller.  The ShareRoller should work with the dynamo hub itself, but the light may impede installation of the adapter).  The adaptor block allows you to install the ShareRoller in about 10 seconds.  This allows you to quickly revert to your “normal” Brompton with minimal weight added… for comparison, hub-motor electric kits must be permanently installed on your front wheel and they add around 18 pounds even if it’s not in use.  Having multiple adaptor blocks allows a single ShareRoller to be used on multiple Bromptons (not simultaneously, of course).

There are two battery capacities that will be available at launch:  one will provide a 12 mile range and the other around 20 miles.  Other notable features include headlight (20 lumens) and a USB port for charging your portable devices.

Jeff graciously let me test ride a prototype when I was out in NYC.  I rode the ShareRoller both with a Brompton and a Citibike.  The application of power from the ShareRoller was very smooth and controlled from the thumb-operated throttle control.  It made the Citibike much more tolerable and the Brompton got almost scary fast.  I gotta say, it was pretty fun to use, and could be useful for pedal-assist up big hills or for just getting home when you’re super tired.

The ShareRoller will go on Kickstarter around February 28.  It certainly isn’t cheap, starting at an early supporter price of $995 on Kickstarter, but it’s a much better and much cheaper solution than other Brompton hub-motor electric kits.  Jeff runs a one-man operation, and the economy of scale just isn’t there yet for him to be able to offer it a a cheaper price.  Jeff and I are both engineers, and in talking with Jeff, I really got the sense that he would rather use higher quality parts than to try to build down to a price.  Jeff is very much a perfectionist…he’s worked hard at optimizing throttle acceleration rates to balance performance and battery life, which was difficult because his suppliers kept introducing newer batteries every few months.  The same attention to detail went into pretty much every aspect of this product.

I know a lot of hard core cyclists and very casual riders may not find this product useful, but for some this could be a very useful piece of gear to commuters.   Here are some use cases that come to mind:


And here’s my own personal use case:
I’m in a city soccer league that plays at different fields around town.  I like to ride the Brompton to the closer fields (around 5 miles) because it gives my legs a good warm-up (plus all the environmental factors that goes with riding a bike in general).  I play my game, then afterwards the team usually goes to a restaurant for dinner.  I fold up my Brommie and ride in someone’s car to the restaurant so they don’t have to wait for me.  After I eat, I have to ride back home.  At this point I’m pretty tired and full, and my ride back takes super long.  The ShareRoller would really come in handy in this situation.  I’m looking forward to getting my hands on one.

A night out with a Brompton rep

Brompton North America representative Ed Rae swung by Metrognome Music and Cycle to Go to give a talk about traveling with the Brompton and just Bromptons in general.  Ed was also gracious enough to answer a bunch of questions that the audience had for him.  After the talk we rode to Sky Bar, had some pizza and had lots of interesting discussions! 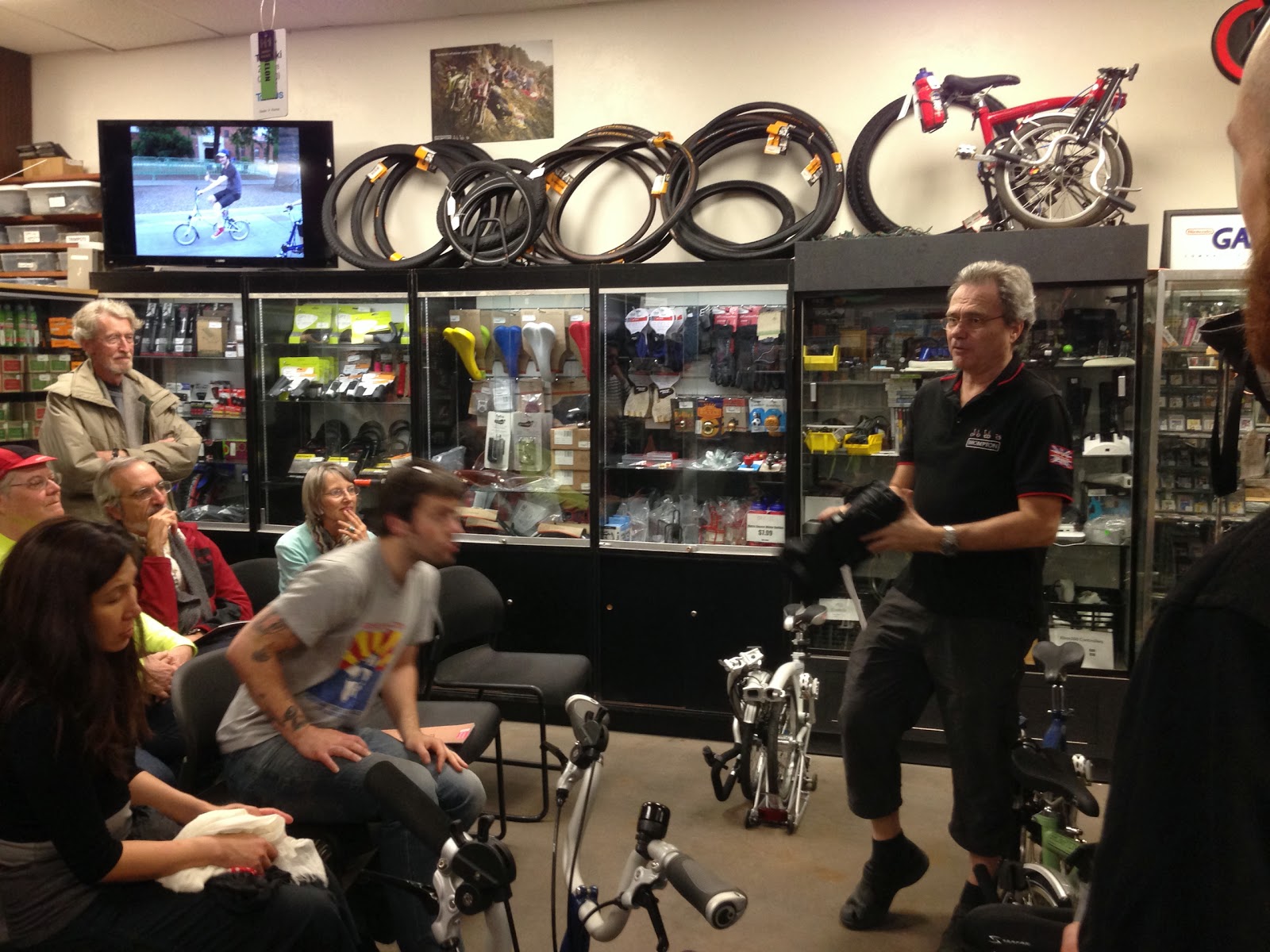 It seems like I've been shot!  Treehugger.com did an article on a $600 pop-up bike lane that was demonstrated at the Open Streets Minneapolis event last year... which was also the host for the Brompton US Championship.

My mug is shown in the first and last pictures of the bike lane.  Also shown are "Purple" aka @bikenanigans and Todd from Metrognome Music and Cycle to Go.

Here is the link to the article.

Thanks to @CalhounCycle for notifying me!
Posted by Unknown at 11:43 PM No comments: