Finally, some loot! No main prize though (yet)...

While I was taking care of some other business up in Scottsdale I took the opportunity to swing by Portapedal Bike in Tempe to chat and pick up some of the accessories that I had ordered and to see if anything was new.  I also wanted to check out the Jubilee edition while they still had it.

The Jubilee Edition is limited to 500 units and included a limited edition S bag with the Union Jack on the flop,  This model is basically a tri-colored M3L (white main frame, red handlebar stem and fork, cobalt blue rear frame) with a Union Jack design under the Brompton logo.  Very cool looking!

Also new was a Brompton polo shirt.  Looked sharp, had to have, and did! 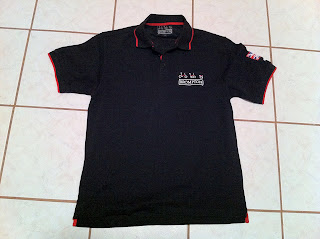 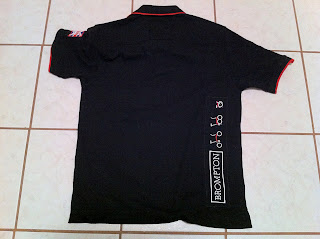 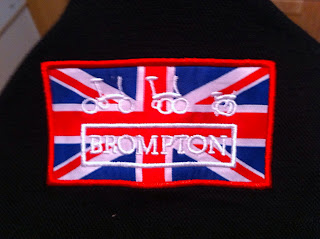 I was also given this trouser cuff (basically a big slap bracelet) for being a good sport for waiting so long for the bike. 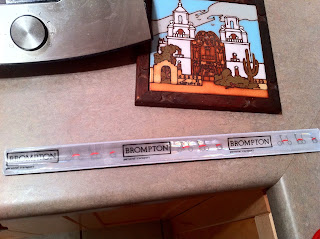 Here's all the other stuff I had ordered and picked up:

Well, the build date for my bike was last week and I still haven't heard anything yet from Portapedal regarding it's shipment.  I'm not sure how long it should be taking, so I am remaining patient.

However, I realized that Euro 2012 is happening RIGHT NOW, and England is still in it.  I can't help but think that this may be the cause for the delay (or maybe not... I'm sure the tournament isn't actually holding back production, but it's fun to speculate).  I don't know who to root for... Ukraine so that they'll get back to work on my bike, or the Three Lions so that they won't be disgruntled and mess up my bike!
Posted by Unknown at 10:04 PM No comments:

One of the things that had attracted me to the Brompton culture are the quirkiness of their owners and, to a greater extent, Brompton's willingness to encourage and embrace this culture.  A major event that showcases the Brompton company's love for their customers is their sponsorship of The Brompton World Championships.


This is not your typical bike race... here are some of the unique rules:

In addition to the World Championships, there are national championships in Austria, the Czech Republic, Japan, Korea, Mexico, Portugal, Spain, Sweden, Switzerland, Taiwan & of course the United States of America.  When I had first heard about the US Championships a couple of months ago I was interested in checking it out and possibly participating this year.  However, I couldn't find any info for the event this year.

That is until today, when I saw the results up on the Brompton website from the race this past weekend in Minneapolis.  Ugh!  I'm not too upset because I still don't have my bike yet, but I hope that there is going to be more than a couple of weeks notice next year.  Maybe since this was the first time that the US Championships was not in Philadelphia it caused some confusion or delay in getting the word out.  Oh well.  I am definitely hoping to go next year, and perhaps one day to London for the WBC!  I wonder if they'll let me get away with wearing a bolo tie.
Posted by Unknown at 11:06 PM 8 comments:

This is how we do it

So, in anticipation of receiving my bike I've watched these two videos of the folding procedure dozens of times. I'm pretty confident that it is THE best videos to show it.

So after two months or so of waiting, my Brommie is finally scheduled to be built this week. Portapedal should let me know when it ships, hopefully late this week or early next.

In other news, I have plans made to go to Colorado in August to see the US Pro Cycling Challenge with a buddy of mine who lives up there and will hoping to bring the Brompton along.
Posted by Unknown at 12:39 PM No comments:

While I am waiting for my B to be built I took the opportunity to ingest some of the history and culture of the Brompton by checking out this book by David Henshaw.  This is the second edition of the book and it was released in late 2011, so it is pretty much up-to-date.

About 2/3 of the book provides background and insight not only about the company, but also folding bikes in general.  There was much discussion about the Bickerton and Dahon folding bikes and their impact on the folding bike scene as well as the company.  Andrew Ritchie (the Brompton designer) is painted not only as an engineer with a relentless pursuit of perfection, but also a a shrewd businessman, particularly in the early days.  The book follows the company from its inception through all of it's trials and tribulations, such as it's inability to find a company to take on manufacturing early on, to the headache of the company's licensing of the bike to the Far East and the near crippling demise of Sturmey-Archer (supplier of multi-gear hubs).  In addition to Ritchie (who seems to have quite a bit in common as one Steve Jobs), there were many other people highlighted in the book, such as timely investors, designers and competitors.

There are a few pages on modified Brommies... recumbents, ultralights, tandems, electrics, etc.  The rest of the book is kind of an owner's manual, although without the step-by-step detail.  It is very handy in detailing the tools needed to do maintenence, calling out parts that need occasional lubrication, and common problems.  This is also very handy if you are looking at buying a used, older Brompton as it will point out problem areas that you should check out.

This book should definitely be in the collection of any Brompton owner.  It is a great reference, especially to new owners like me.  I believe that it may only be published in England, however I was able to get my copy used through Amazon.
Posted by Unknown at 11:16 PM No comments: