Heard some rather sad news today from a Path Less Pedaled retweet and the Riding a Folding Bike Around Manila blog regarding a bike touring couple that were killed in an accident today in Thailand
(Here is a news link to this story).

Peter Root and Mary Thompson wrote the twoonfourwheels blog which I had unfortunately not heard of until today.  Their passion for exploration and human interaction was evident in their writing and films (Here is a link to their videos on Vimeo).

This is an unfortunate reminder that life has a finite shelf life.  I admire Root & Thompson for living it on their own terms and living more than many people who are many years older.  And while I have been fortunate to explore much of the world, I have never done so by bike.  I hope to remedy that in the not too distant future.

Please be safe out there and let your loved ones know that you love them.  Be kind to one another.  Peace.

On a recent cold bike commute to work I was drinking "damn, it would probably be better if I had something warm to drink on my ride." Concurrently, I saw a tweet from a friend of mine regarding this new concept of "bulletproof coffee." That sparked my search for a coffee mug that I could use on the bike.

There were several options that I saw. One was a coffee cup holder that attached to the handlebars by PDW.  It's pretty nice, but it's more meant for grabbing coffee from a shop as opposed to holding your own brew.

I was doing a lot of research on water bottles and came across this little guy:

This mug claimed to be leak-proof, was double-wall vacuum constructed and holds 16 oz. of fluid.  Sounds pretty promising.


Flow of your drink is permitted by pressing on the little button upon which your index finger naturally gravitates.  It was pretty stiff at first, but now that it has broken in after a couple of days it works perfectly.
I've been using this mug every day regardless of whether I am commuting by bike or car.  Once I'm done with my coffee I refill it at the water cooler.  I feel that I am definitely drinking more water than I usually do.

On my current trip to Denver I brought the mug along.  It was empty so that I can take it through security, and then I filled it up at the drinking fountain before my flight.  Now I didn't have to wait for the flight attendant to bring me a drink when I was thirsty... this was actually really great for when we were waiting to take off or to get off the plane.

After a couple of weeks, I can attest that the mug is certainly leak-proof.  There is an elastomer o-ring that provides the sealing action, so the mug should remain leak-proof as long as that holds up.  The mug is easy to sip from, especially once the button breaks in a little.  I can also confirm that drinking is very easy with gloves on.

The vacuum construction seems to hold drinks at their temperature pretty well, but I haven't done any comparison tests or anything.  I suspect that it wouldn't be better than the Hydro Flask at holding temperature based on this comparison, but I would hope that I had finished my drink before a few hours have elapsed.

In conclusion, I'd give the Stanley Nineteen 13 One Hand Vacuum Bike Mug a big thumbs up as long as it stays leak-proof (which I foresee it being for a while)!
Posted by Unknown at 10:32 AM 3 comments:

Street Cred and Other Press Bits

A friend of mine sent me a couple of pics of a Brompton being featured on Pimp My Ride, a show on that used to be on MTV (I guess it's on Speed Channel now) that take cars and highly modifies them.  I think that is the host (rapper Xzibit) riding it in the second picture.  Unfortunately I don't know when this show aired or have any other info on the Brompton. 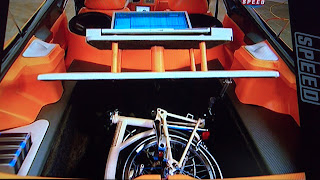 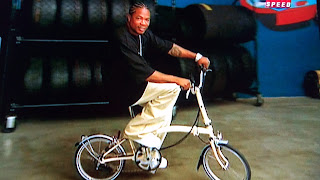 In other advertising news, I'm sure a lot of people have seen this commercial with a second of Brompton (at 0:19):

It looks like that particular Brompton footage is taken from the NYCeWheels video of the electric Brompton:


I hope NYCeWheels and Peter got some commission from that!

Posted by Unknown at 6:08 PM No comments: