Today I'm writing a review of the Aardvark seat cover (black, standard size) bought from Rivendell Bikes.  The link is here for the seat cover, however since Rivendell is a small company they don't carry a huge stock of these and something else (equivalent or better) may replace it.  Or they could just stop carrying them for business reasons.  The covers costs $11.

Ok, this may not be the most exciting review ever, but I think this piece of gear will actually come in handy for me quite often.  A vast majority of the time I would ride with out the cover, but here are a few instances in which I would use it:

Initial impressions:
The cover material seems like a light weight neoprene fabric (wet suit stuff), which makes sense as a waterproof material.  The fit is perfect for the Brooks B17.

The cover weighed 0.8 oz (22.7 grams) on my kitchen scale (not that weight should be much of a consideration for this item).  It's not really bulky, but the shape of the cover also prevents it from rolling it up super tight.

Riding with the cover:
You will probably notice a difference when riding with the seat cover.  The first thing you notice with the cover is that there's a lot more grip on the seat.  With the Brooks I'm used to sliding around a bit to get comfortable or to raise out of the seat for tight turning or dismounting.  Kinda feels like riding with a wedgie, if that makes any sense.

I also noticed that it's quite a bit warmer in the seat area with the cover than without, which may be a nice feature at cold temperatures.

Conclusion:
So far I think this was a decent buy (for $11), but not really something I would use all the time though.  I will primarily be using it to protect my Brooks when I jam it in my car or have to lock up the B outside.  Maybe I'll ride with it if it's super cold.  Or if there is an unexpected rainstorm.  Basically as a nice little insurance item to protect my already beat-up Brooks.

New GoPro Hero 3, aka How I spent my REI 20% off coupon and dividend

On Friday I went ahead and spent my annual REI 20% off coupon and dividend on one of the new GoPro Hero 3's, black edition (which is the flagship model). 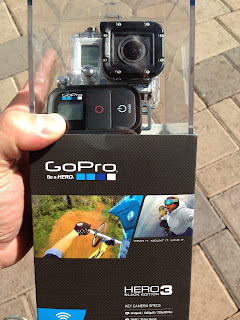 I won't get into too many detail with the specs and such since there are practically an infinite number of sources online that showcase the new features and performance of the Hero 3.

I will say that the smaller size and lighter weight makes a HUGE difference in the usability of the video I can record.  The following two clips are from GoPros mounted on top of my helmet.  The first video is of the new Hero 3.  The first part of the clip is of me going under a bridge to show how it transitions from light to dark.  The second part of the clip is of me riding on a bumpy road.

The clip below is of me riding in El Tour on a bumpy road (watching a unicyclist) with the Hero 2.  While not exactly apples to apples with the first clip (different roads), the two roads are similarly bumpy.   You can see and hear the excessive movement of the Hero 2 inside the case in the second clip.  I think the lighter weight and smaller size really helped reduce the rattling.


I am really happy in the improvement in footage I can get with the GoPro Hero 3.  I plan on using it at the Brompton US Championships in Minneapolis this summer!

This year's US championship was just announced tonight!  It will take place in Minneapolis again on June 23, 2013.  I am definitely planning on being there... anyone else???

Gearing up for camping

The weather is getting nicer and I've been recovering from my cold.  It was nice to get back on the Brompton!

My friends got married last week at Catalina State Park, north of Tucson.  We camped overnight after the ceremony.  It's actually a really nice campground with nice restroom facilities and other conveniences.  This experience really got me itching to try bike camping.

I've started slowly but surely gathering the equipment I need to do S24Os (and even full length tours).  I've based my selection of gear from what Laura and Russ from PathLessPedaled have done (their book, The Unauthorized Brompton Touring Guide is also an excellent resource).

So far I have (or have ordered):
I think that's all... I also have the Brompton C-bag, with which to carry food, phone, maps, possibly iPad.  I've been housesitting for a while, so I haven't been able to try riding with all this gear yet.  I'll update when I do.

For those of you lucky enough to live nearby and/or to do some traveling, it was just announced that the BWC will take place on July 27 & 28 at the Orbital Cycling Festival in Goodwood. Unfortunately I won't be able to make it this year, but I am anxiously waiting for the United States Championships! I do hope to get out to the BWC one year, probably in 2015.

Brompton put up a video about it... I'll link to it when I get the chance.

Update:  Here is the video.

Posted by Unknown at 9:13 AM No comments:

Email ThisBlogThis!Share to TwitterShare to FacebookShare to Pinterest
Labels: championship


I'm still getting over being sick for the past week, but I still was able to make it out to the Old Pueblo Grand Prix with the meetup group.  We did a parade lap with some cool kids (I'm in photo #5 in this Tucson Velo gallery).  Unfortunately I wasn't able to stay and watch any of the races.

It was also brought to my attention that there is a new video of the Brompton factory at work making works of art.  I always enjoy these insider videos, so I linked it here for you to enjoy!

I have been getting the itch lately to try my hand at bike camping a la Russ & Laura from pathlesspedaled.com.  Unfortunately injuries and extreme cold weather (for Tucsonans anyway) have prevented me from even commuting on the Brompton.  Plus I have to get some more gear before I can embark on my first trip.

However, I did come across an introductory class offered by BICAS, our local non-profit bike repair and recycling collective. 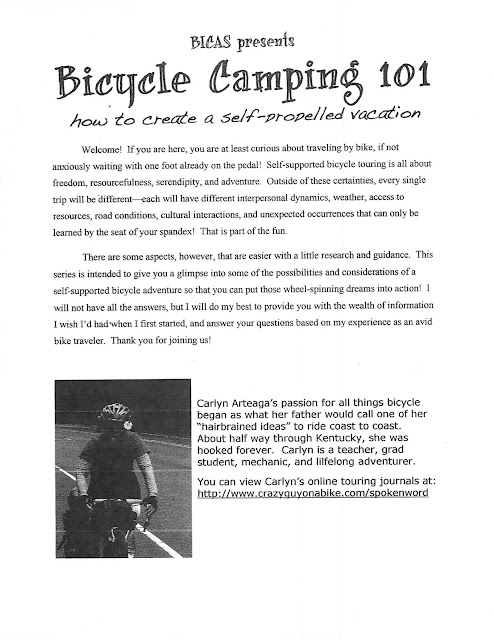 The class was very informal and had a lot of group participation.  This class was the first in a series of four that will be taught, and an organized S24O (Sub-24 hour overnight) will be happening through BICAS on May 18-19.  Unfortunately I will have to miss the next two classes and the S24O due to prior commitments.  I am truly bummed! 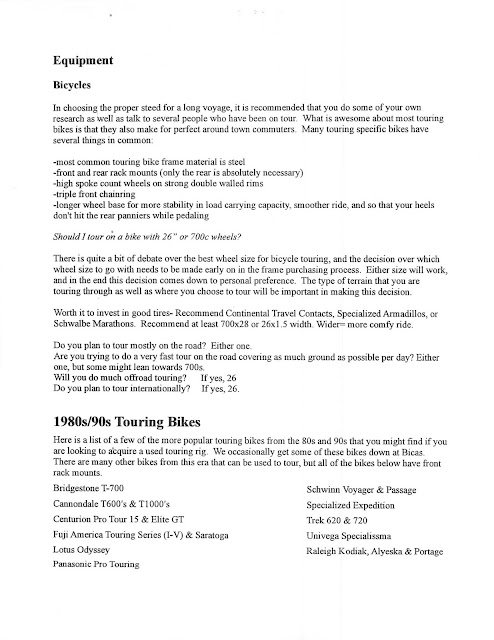 Part of this class went over what bikes were commonly used for touring and camping.  Of course Bromptons aren't on this list, but the consensus was that you can pretty much use anything that will carry your gear.  Steel is good because it is forgiving (compared to carbon or aluminum) and can be bent back into shape if in a wreck.

If you are using  full size bike, you should think about whether to run 26" or 700c wheels depending on tire availability during your travel.  Since the Bromptons have 16" wheels, we just have to carry our own or have someone on speed dial to ship them when we need them.  Don't expect shops in small town to carry tires and tubes in our size. 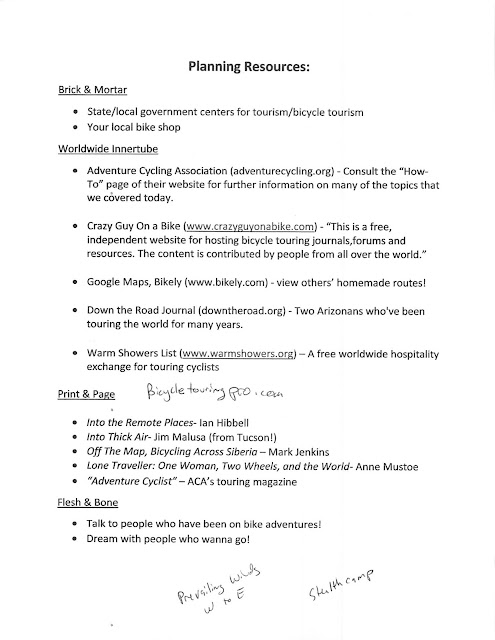 The internet resources are really great, particularly crazyguyonabike.com, which is a site where anyone can post up their tour experiences and pictures.  Searches can be done using keywords for location or route.  You can really spend weeks just browsing that site!