Sunday was race day!  The weather was very warm and much more humid that this Arizona boy is accustomed to.  The day started off with Todd and I riding the Metro to RFK Stadium.  I was wearing a tweed-ish jacket that I bought at a thrift shop, while Todd was decked out with his Beetlejuice / referee / zebra outfit. 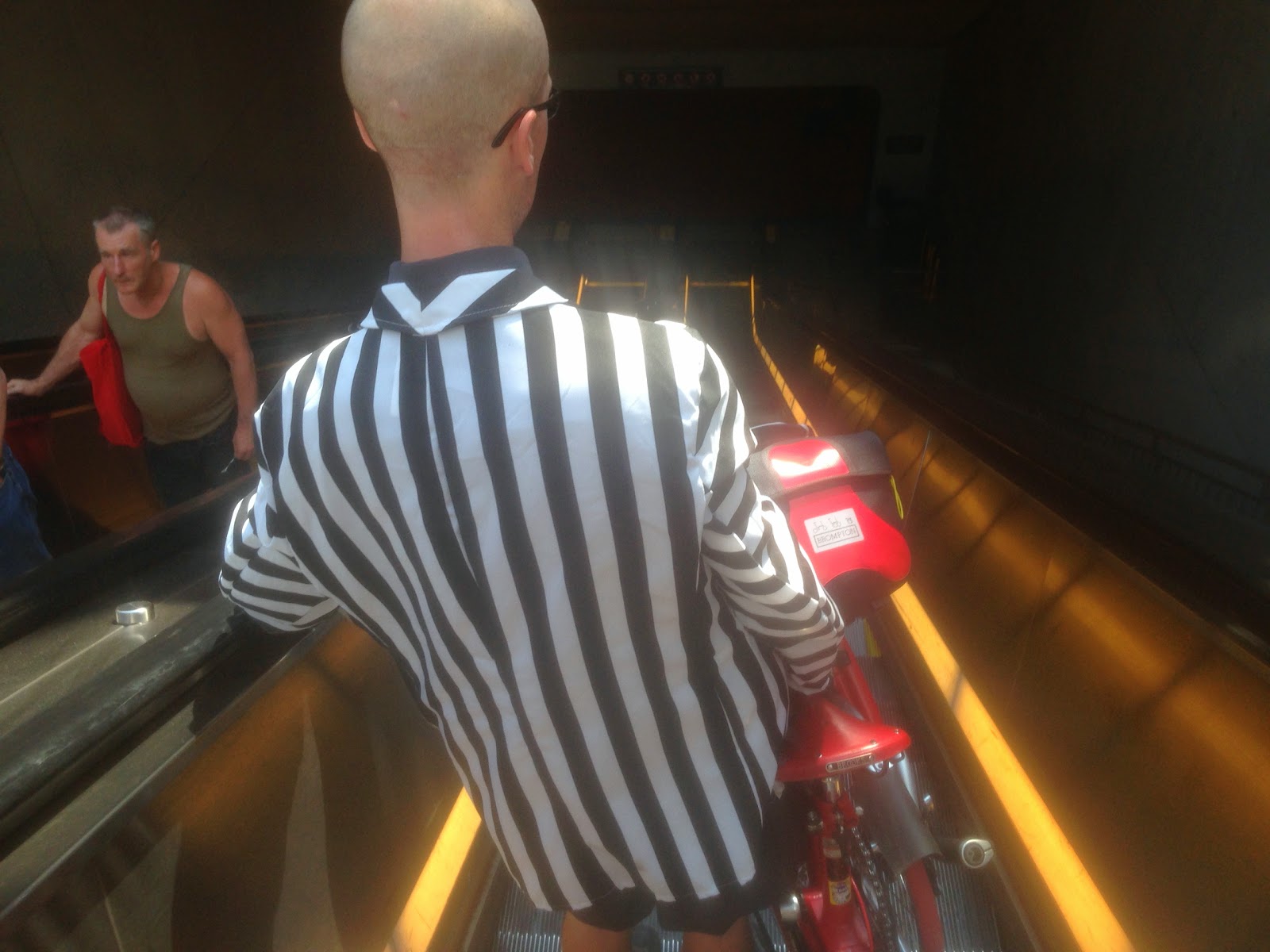 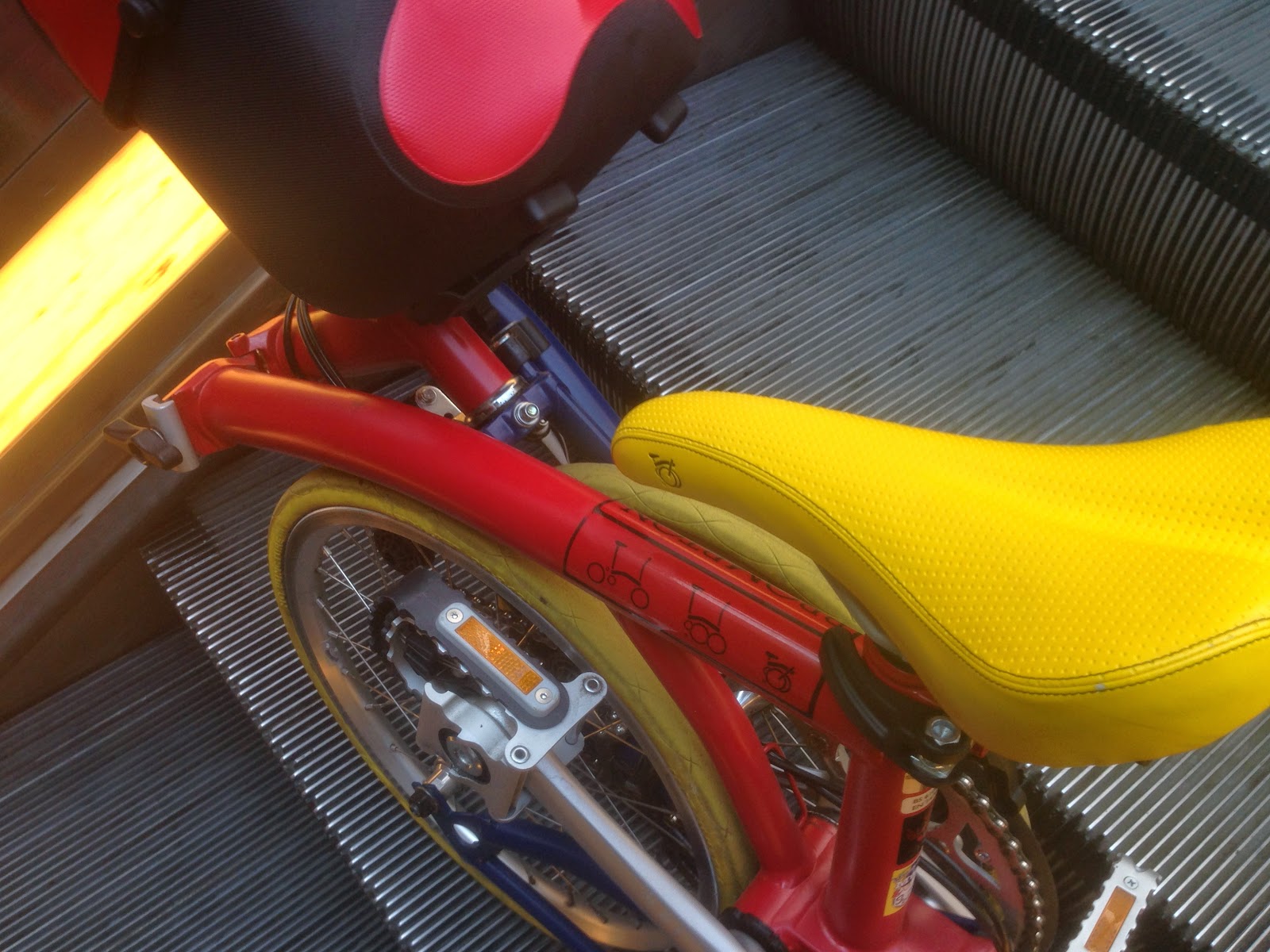 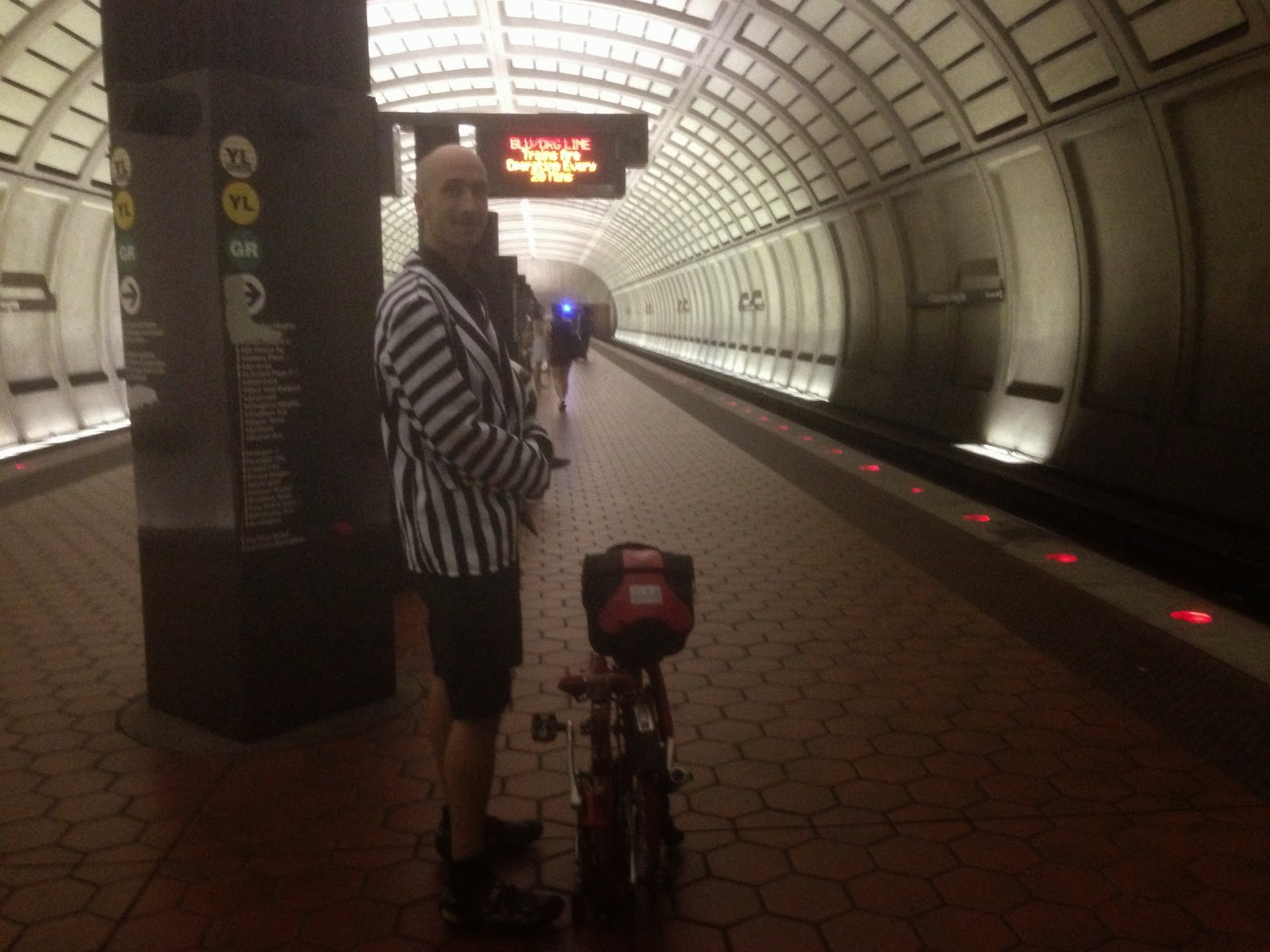 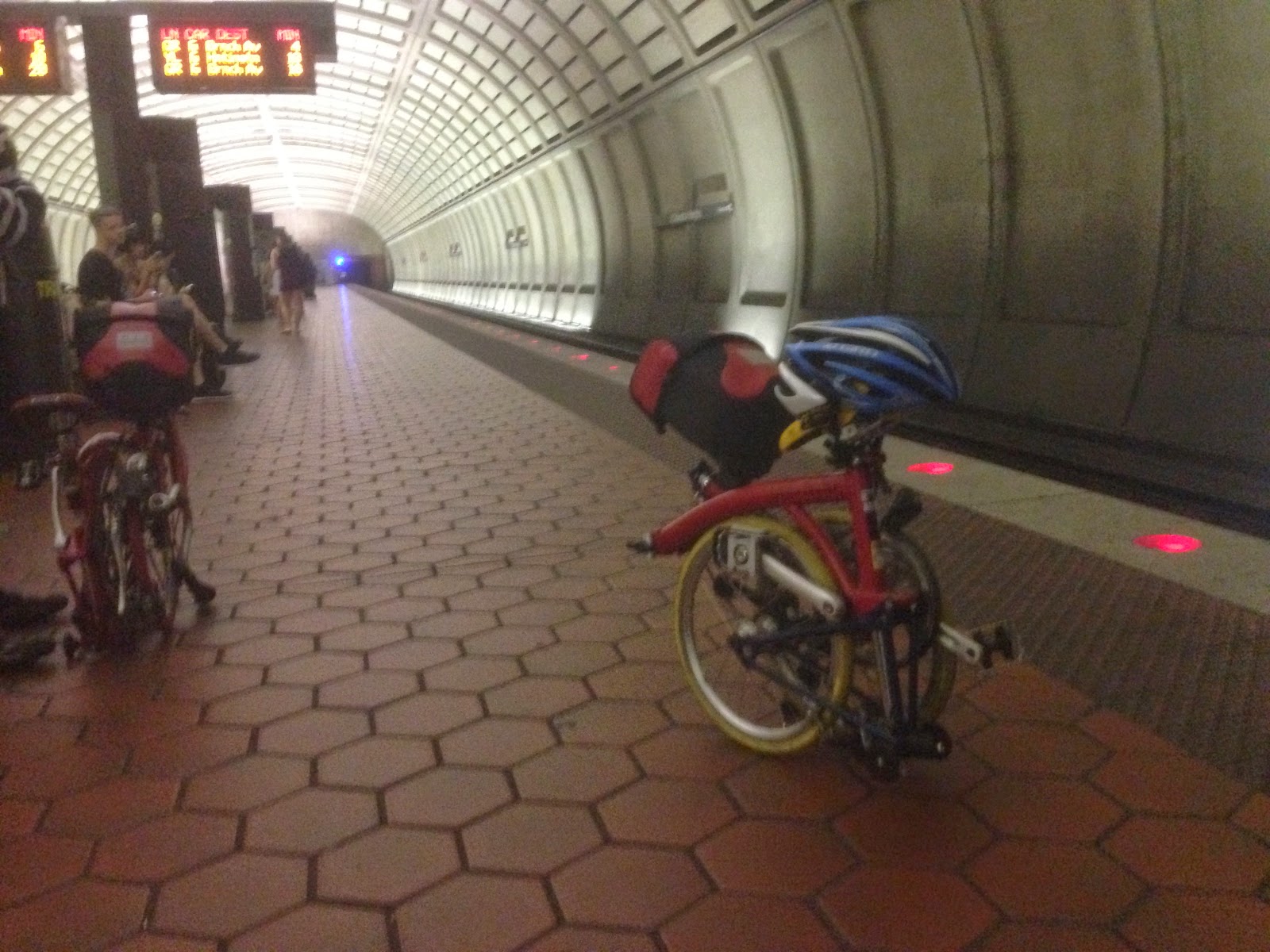 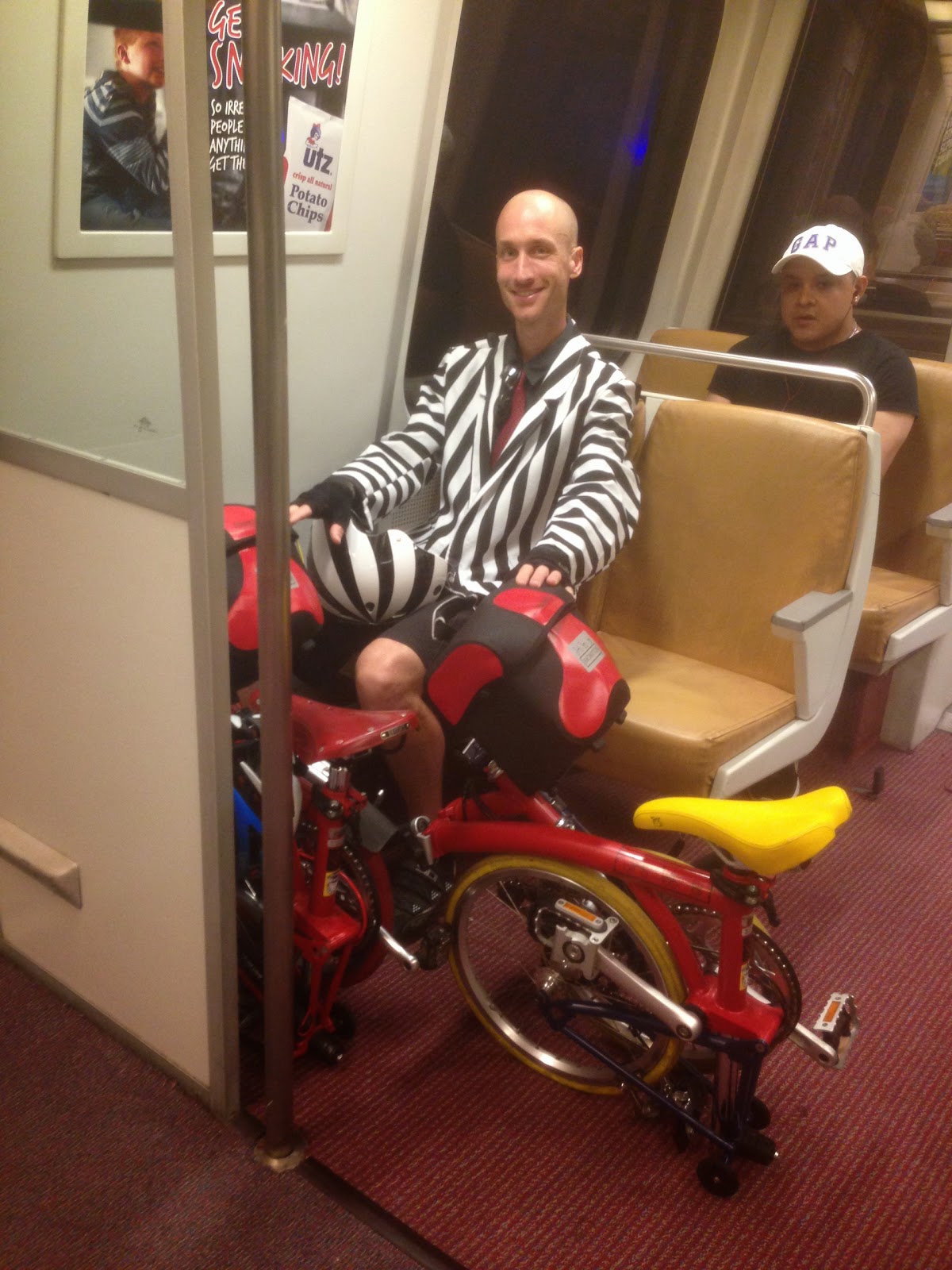 We arrived at the race site just before the crowd that left from BicycleSpace.  It was really starting to warm up by the time the race got started. 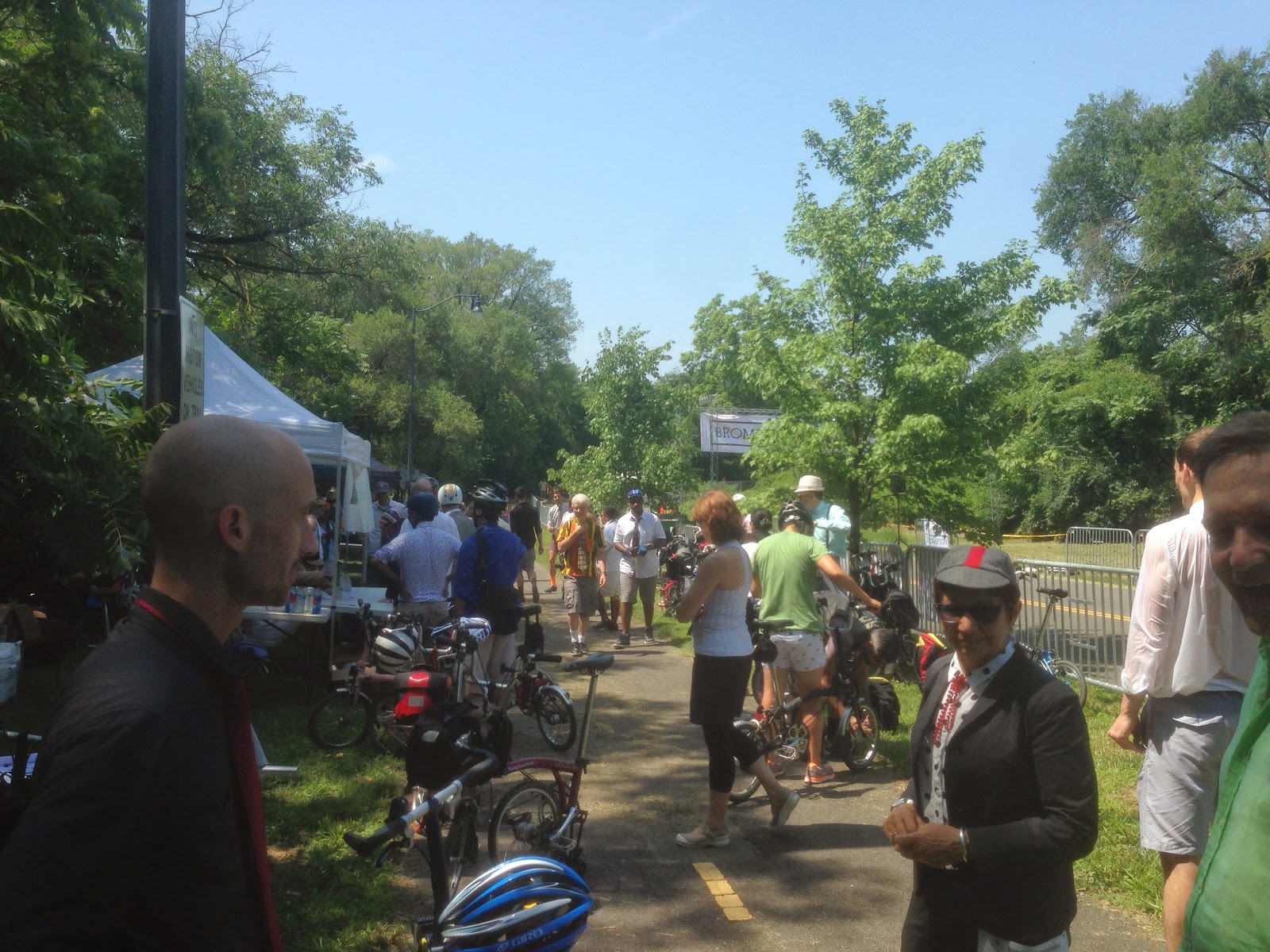 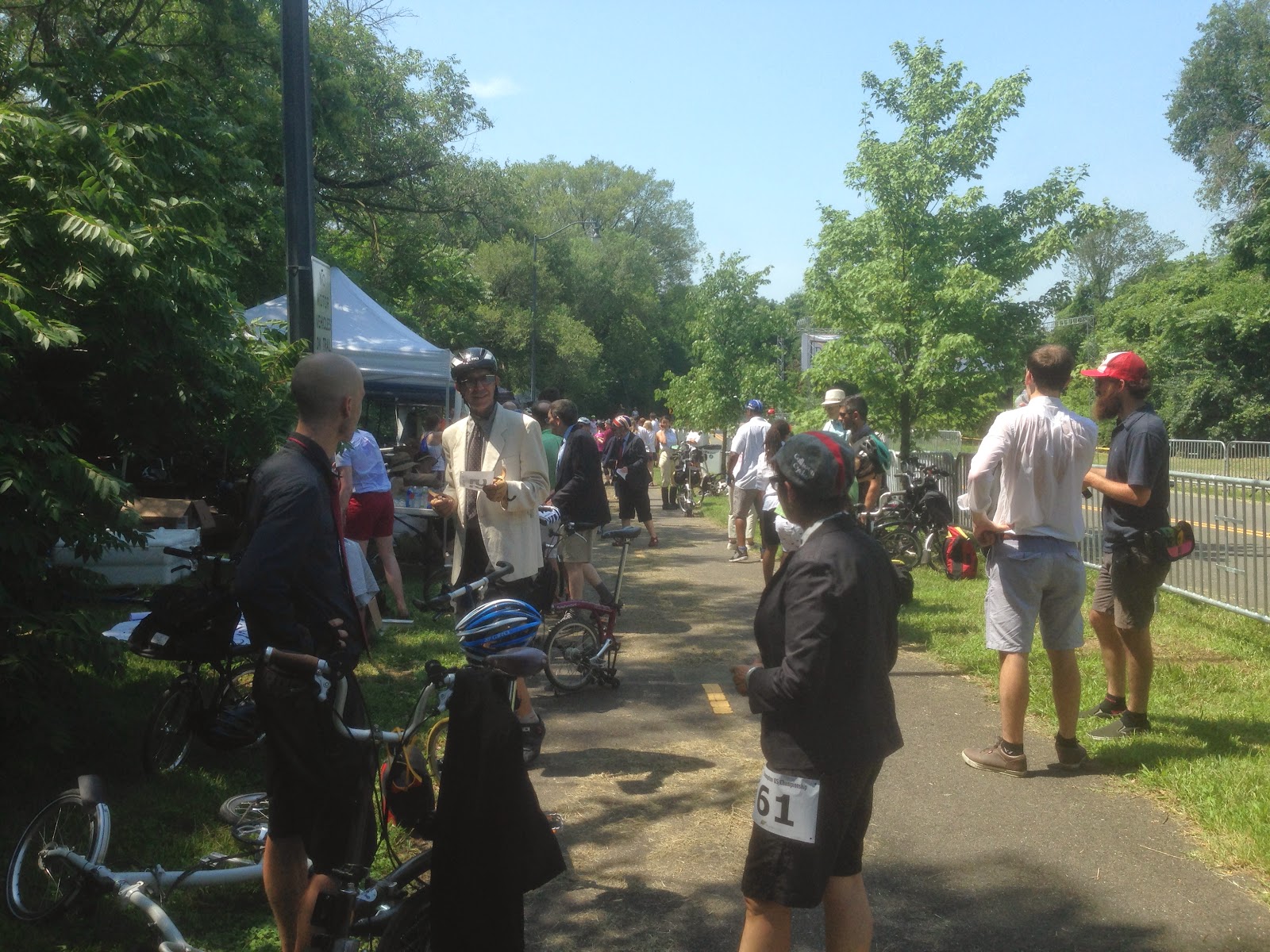 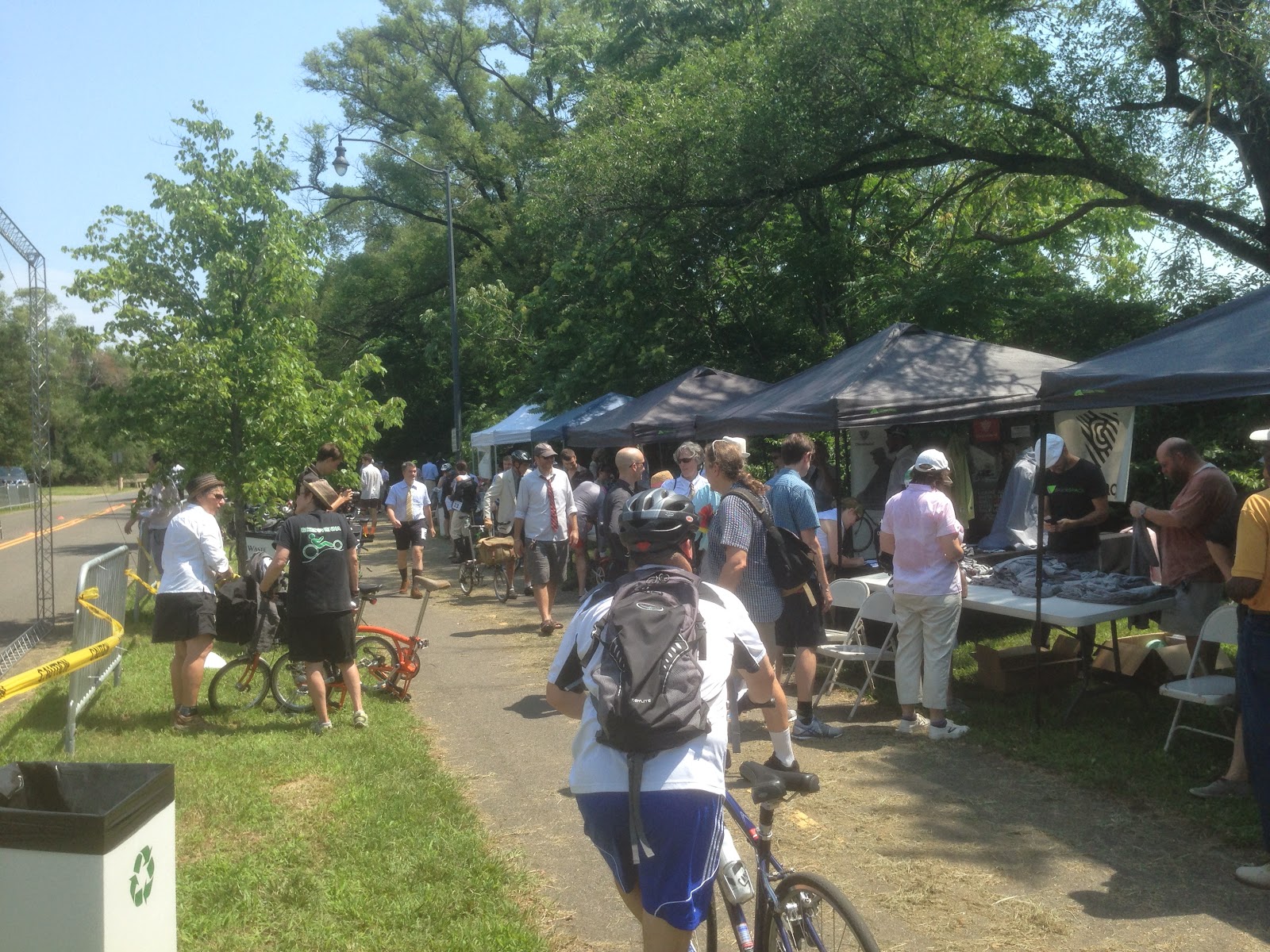 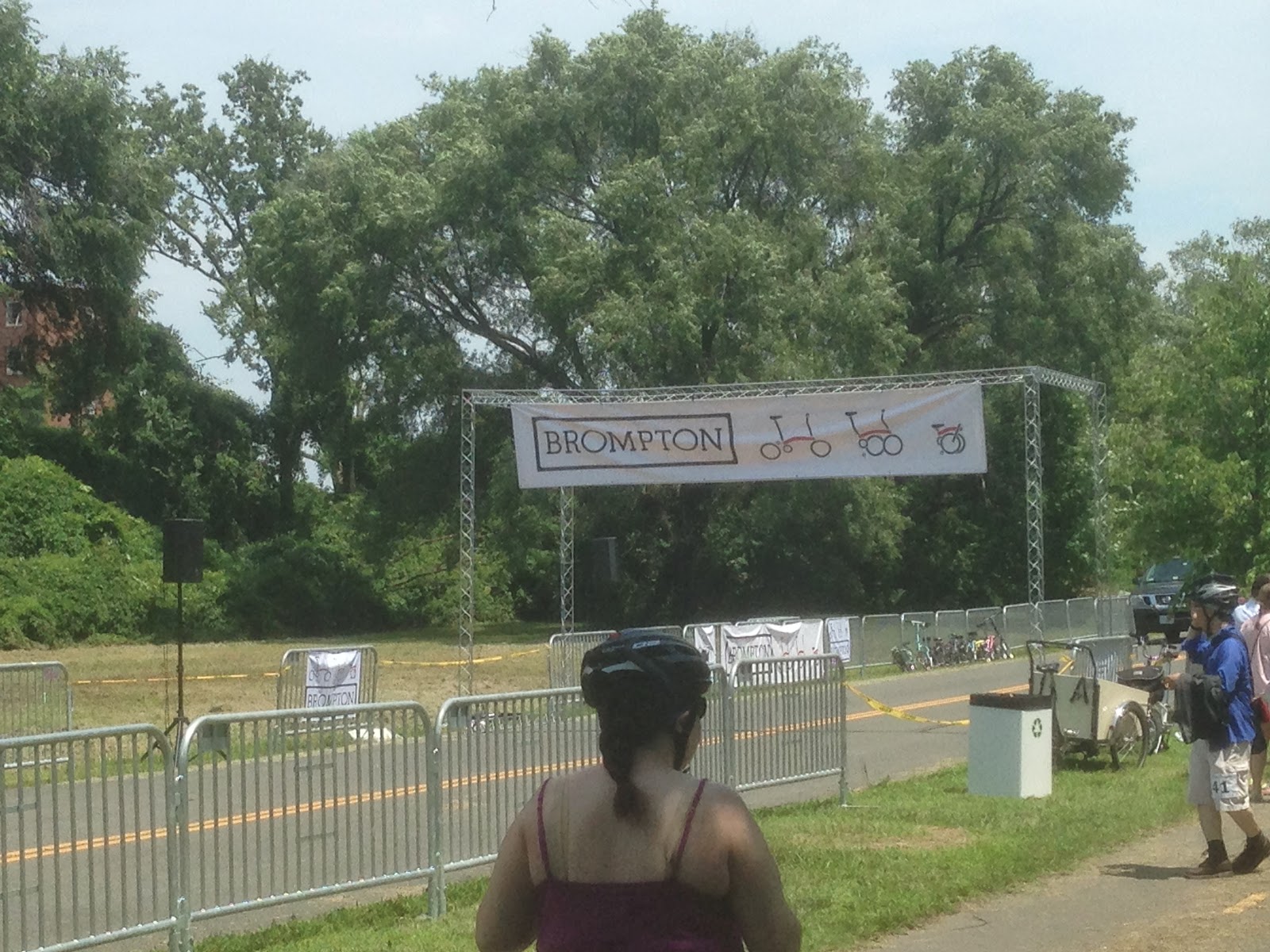 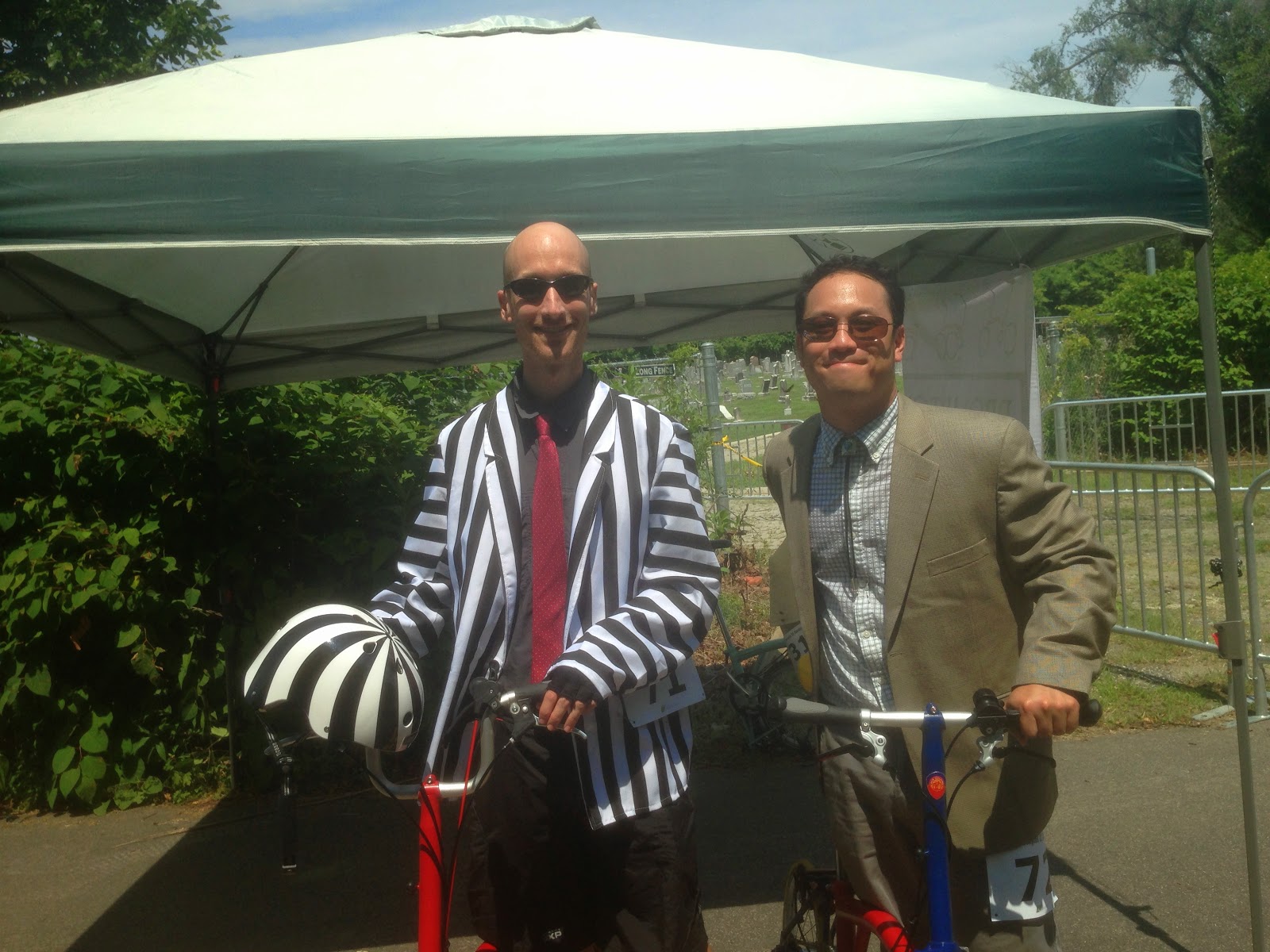 I was pretty slow during the race... much slower than last year.  I hadn't been able to ride the Brommies nearly as much as I wanted to this year, plus I had just come back from two weeks in Brazil (excuses, excuses).  All of that in addition to the heat and humidity.  Regardless, I still had fun and I didn't put a foot down, which became my impromptu goal during the first lap.

Here is my on-bike GoPro footage (note that Luke from Calhoun Cycles is yelling my name every time he passes me):

I unfortunately missed the fastest folding contest and the best dressed announcement as I was waiting to get a wonderful panini from a food truck that was out there.  Oh well.  As always, it was a blast and I hope to be able to do it again next year!

Start of the race from WTOP news:
http://youtu.be/lOcX6z6xXtY

The Brompton Urban Challenge took place on Saturday during the 2014 BUSC weekend.  The BUC is basically a scavenger hunt where we post silly pictures of ourselves in front of landmarks in Washington DC and share them on social media.

I teamed up with with the Tucson crew (Todd and Mike) and we teamed up with a couple of locals (Amy & Mike) to go conquer DC.  They gave out numbers to each of the teams and we were Team 5. 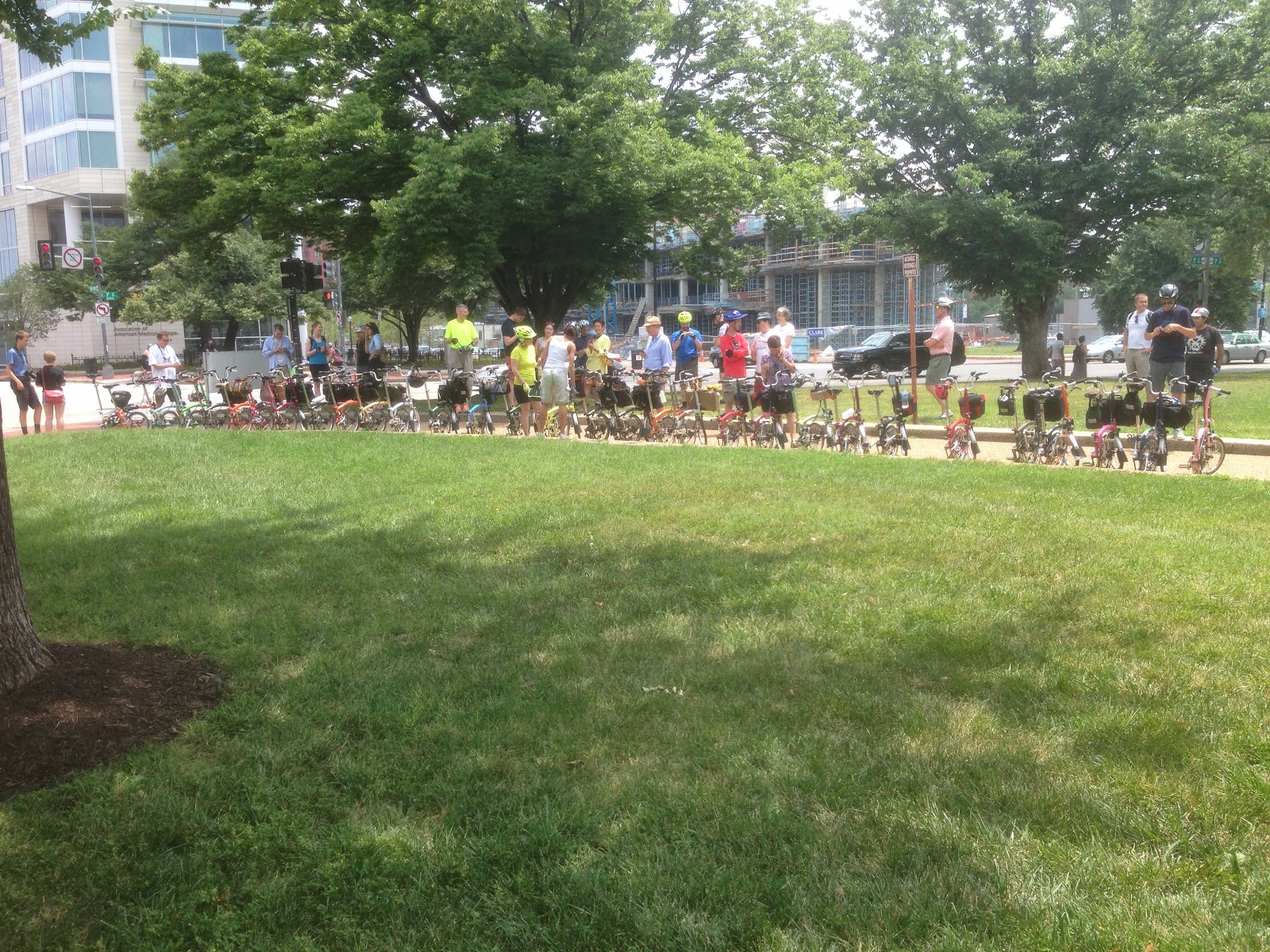 The clue sheet had something like 40 clues to solve... way to many for us to accomplish in about 4 hours.  The following pictures are some of the clues that we solved and shared on Instagram and Twitter: 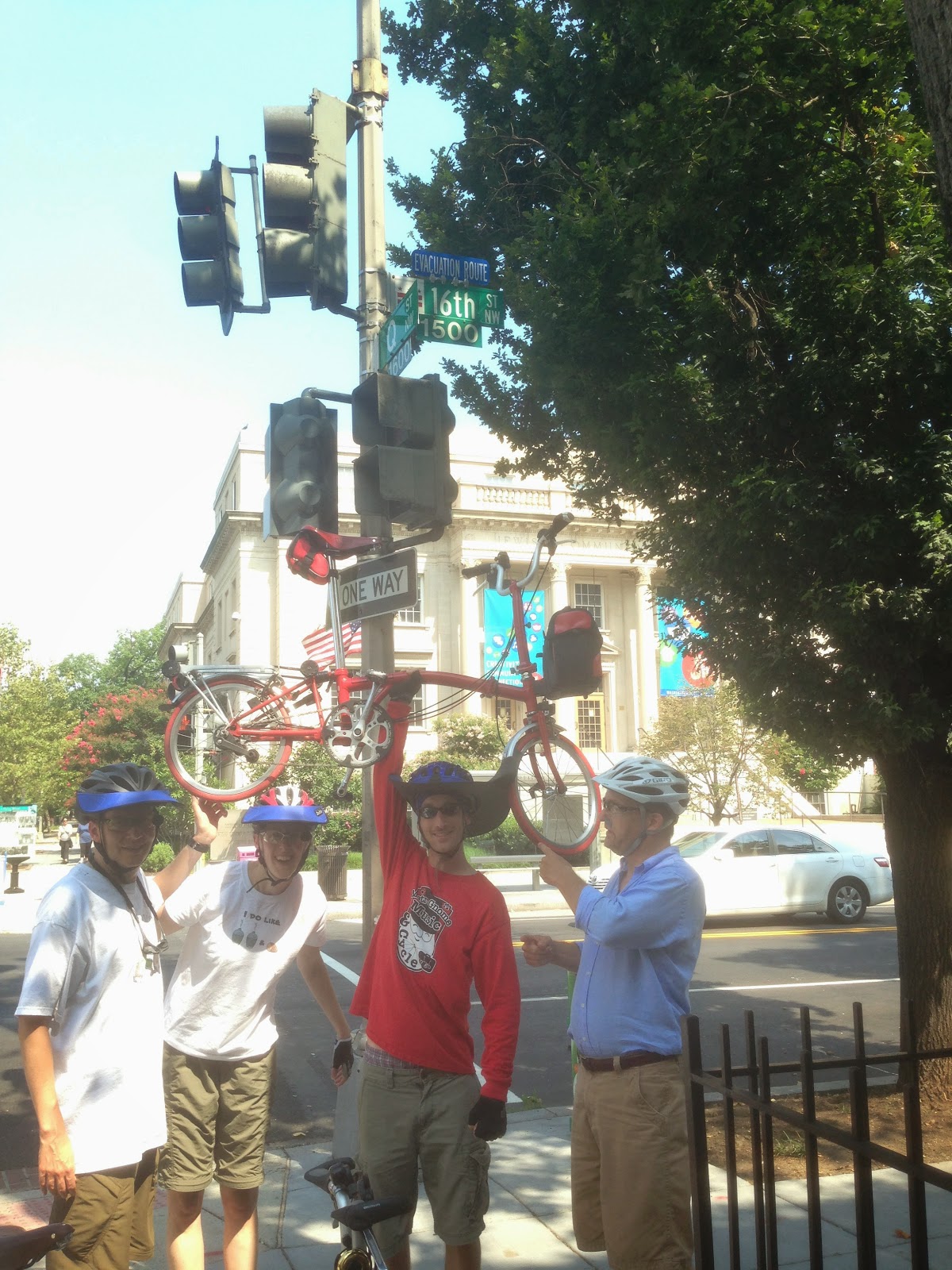 There were also some videos taken, but I haven't been able to figure out how to show them on here.  Anyway, when it was all said and done we ended up taking first place!

We got our pick from a pile of stuff that BicycleSpace graciously provided... I got a BUSC hat and some Ergon cork grips!

I'm going to try to put together a video from my GoPro footage... the battery died about halfway into it, but I should be able to make something interesting.

Here is a link to the Tagboard which has most of the pictures from all of the teams:  https://tagboard.com/bucdc

An once again, Marty at Brompton Diaries has a great writeup of this event: http://www.thebromptondiaries.com/2014/07/bnc-2014-the-brompton-urban-dc-challenge/
Posted by Unknown at 9:51 PM No comments:

This past weekend was Brompton US Championship weekend in Washington, DC.  It is an annual event that I've been to for the last two years (this year and last year) and it is something that I will continue to make time for every year.  Both years that I've been to the championships have been a blast.  The BUSC this year was hosted by BicycleSpace.

This year, the Friday night pre-event was hosted at the British Embassy.  Todd and I were trying to find it earlier in the day and passed under it several times since the road the embassy was on was not visible from the bike path that we were using (Rock Creek).  When we rolled up, there was a pretty big line to get in past the guards. 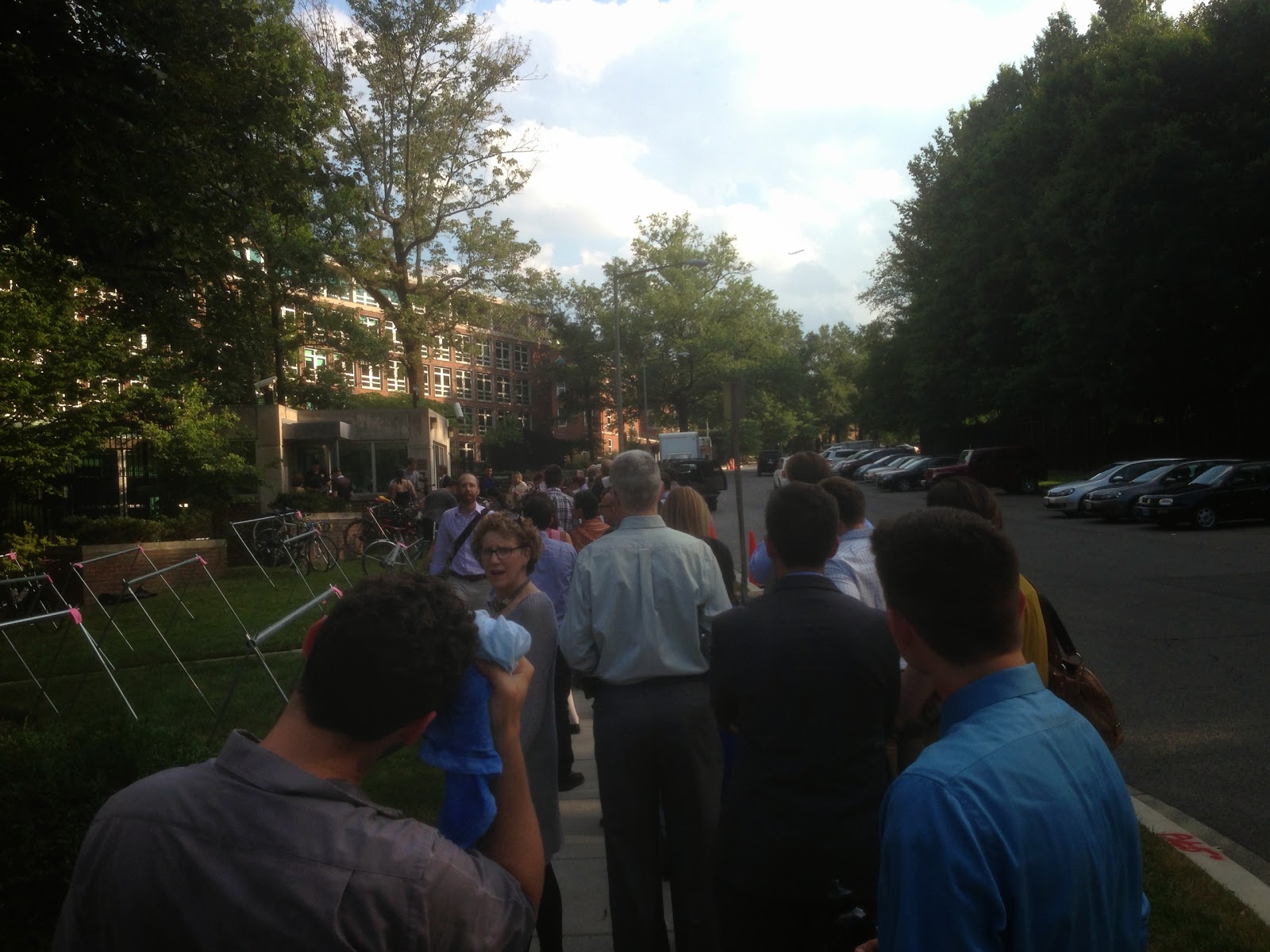 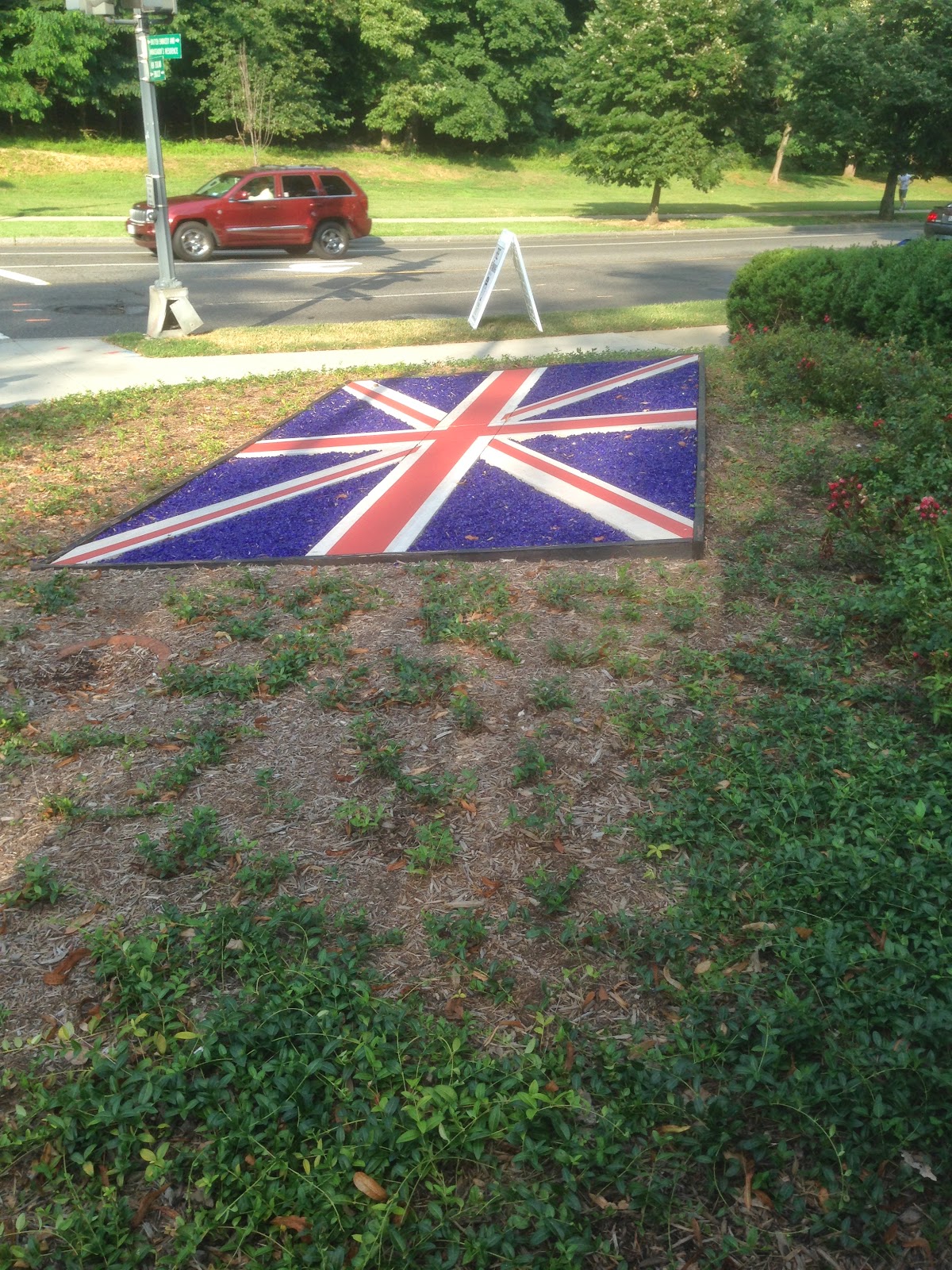 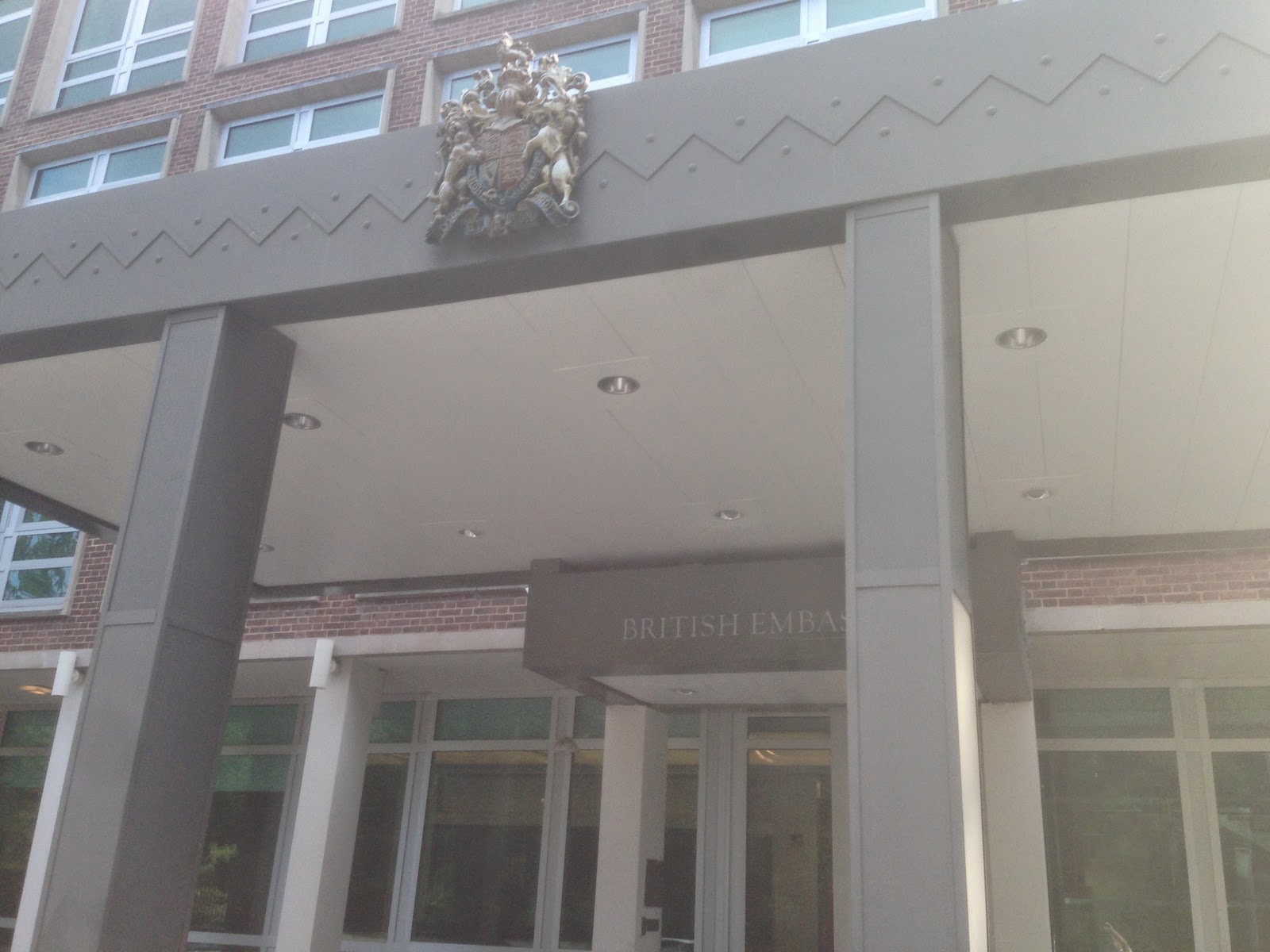 People from all over were dressed to the nines for this!  The Embassy promoted everything British, including Crabbies Ginger Beer and a few other alcoholic beverages! 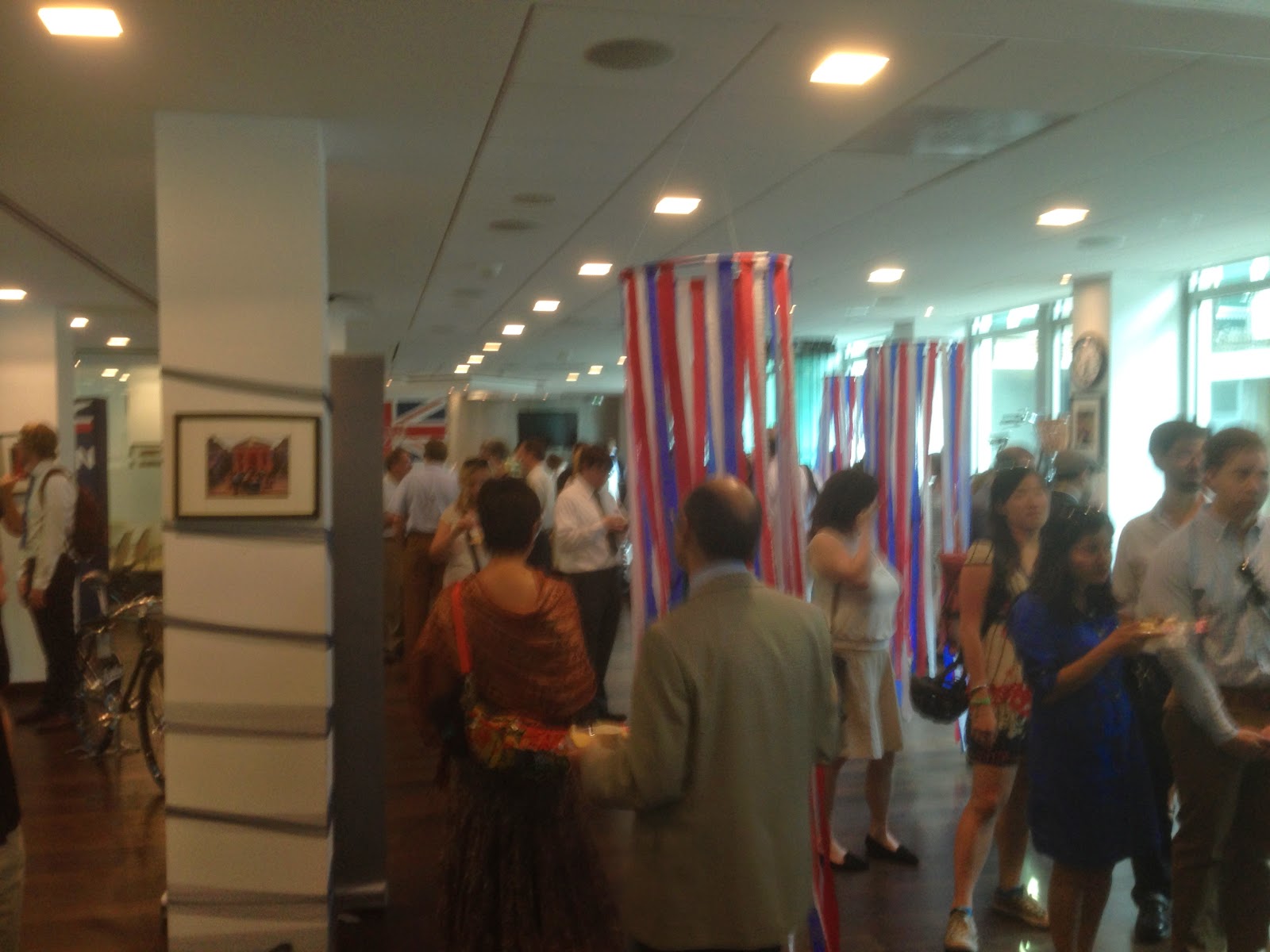 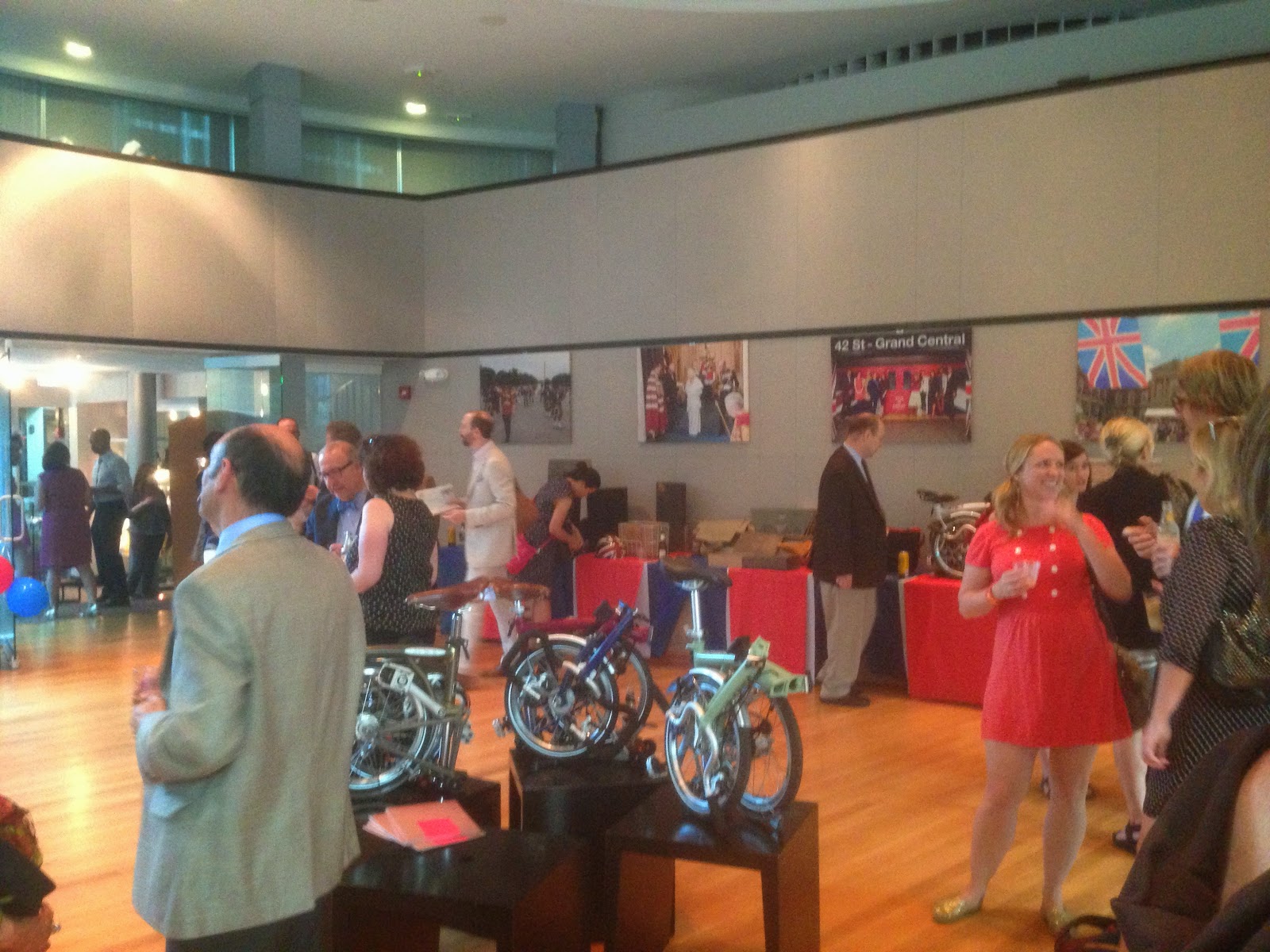 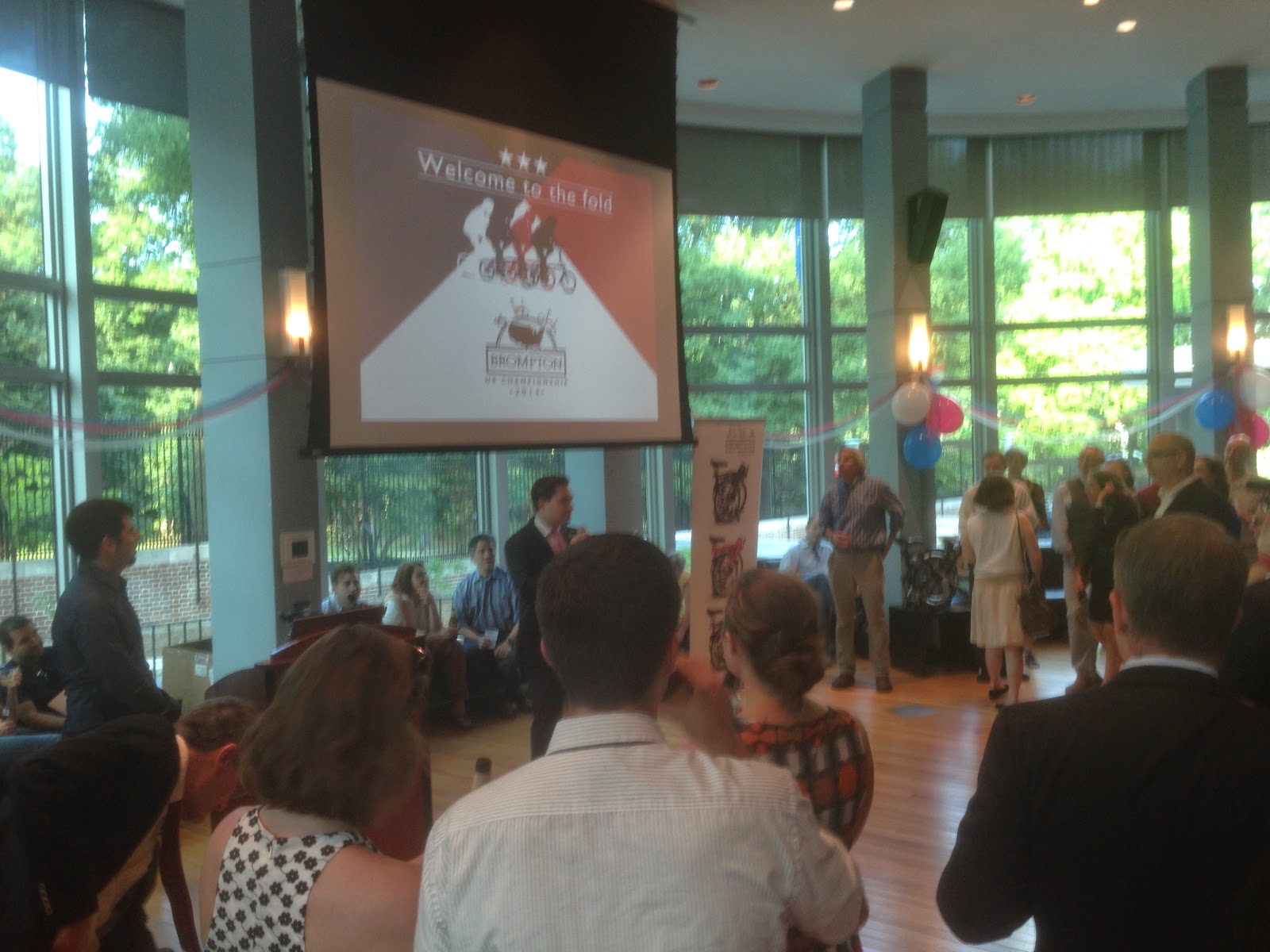 There was a quick folding contest for those who wanted to volunteer.  Not many people were eager to do it, so went ahead and stepped up to do it, as did my friend Melissa from last year's BUSC.  Melissa ended up winning the contest (I blame the booze) and won herself a Brooks saddle!  Here's a someone else's picture of me trying my best... 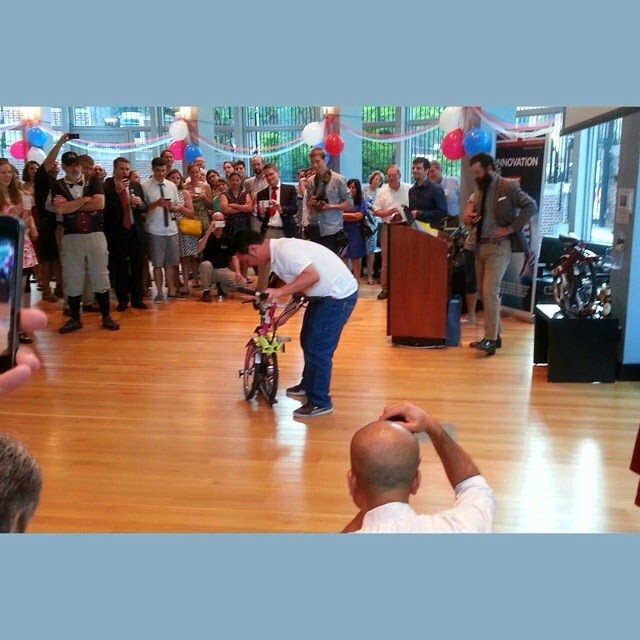 After the folding contest, Marty from The Brompton Diaries (who has much better coverage than me here) introduced herself to me and we had a nice chat about the state of Brompton blogging.

We had to cut out a little early unfortunately, but I don't think we missed much after we left.

Heading to BUSC in Washington, DC this weekend!

I'm getting packed up and ready to go to the this year's Brompton US Championship this weekend in Washington, DC!  Will you be there?

I've not ridden nearly as much as I would have liked this year and am expecting to be much slower than last year, but I'll still have fun!
Posted by Unknown at 8:03 PM No comments: