In my early days with the ODB, I would inadvertently "overfold" the folding pedal and would scratch the raw lacquer finish.  This was upsetting, particularly on such a beautiful, expensive bike. 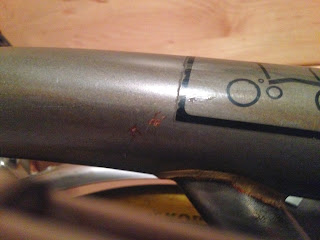 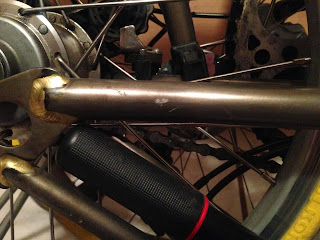 When I got Mondrian, I was determined to not let that happen again.  I recalled in an earlier post that Jeff from Bromfoot suggested using his product in order to prevent this from happening.

Fast forward to November 2013.  I had bought Mondrian and Jeff had recently released the Bromfoot 2 that is shaped for the newer style folding pedals.  It was go-time!  I bought mine at Portapedal.

Here is a video on how to install the original Bromfoot.  The Bromfoot 2 is even easier since popping off the reflector is not required.

I found the Bromfoot 2 to be a clever solution to a few of the shortcomings of the Brompton folding pedal.  Firstly, it'll prevent me from scratching the frame if I make a bonehead fold.  It'll also prevent scratching during transport (like flying in a case or gate checked).  Secondly, I did notice that I was far less conscious of the placement of my left foot when riding.  Before the Bromfoot 2, my left foot would feel out of place and I would have to re-adjust it.  Now I'm doing that less.  Thirdly, I've heard that other riders have had trouble with their heels getting caught on the small rolling wheel or Eazy Wheels (it hasn't really been a problem for me, but I could see how this could happen).  The Bromfoot can give your foot a little more clearance room.

So... initial impressions are very positive for the Bromfoot 2.  I'll keep you updated if anything changes.