Earlier this week I had the opportunity to join a bike ride with mountain biking legend Gary Fisher.  Mr. Fisher basically created the genre, and nowadays is going around the country to promote utilitarian biking.  This ride was sponsored by Trek of Tucson and Borderlands Brewing to benefit the Living Streeets Alliance. 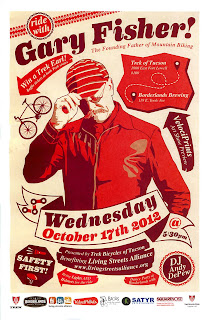 Mr. Fisher was quite cheery and generous with his time, signing a bunch of autographs and posing for tons of photos.  I think some 200 cyclists turned out for the ride.  One of these cyclists rode up in his wife's orange Brompton.  Instant camaraderie!

The ride itself was a little annoying due to the start and stop nature of trying to move 200 cyclists through major traffic, but it all worked out due to the efforts of El Grupo volunteers dictating traffic.

As we rode, Mr. Orange and I spot another Brompton!  And this one was the one I posted about last weekend.  Just like magnets, we clung together throughout the ride, and hung out together once we reached Borderlands (where we met up with Mrs. Orange).  We discussed lots of topics regarding Brompton ownership and we all had the same kind of commuting habits and dreams of touring long distances (inspired by the Path Less Pedaled).  I think we're on the path to something good here!  We exchanged emails and hopefully we'll get something organized soon, like maybe some kind of club or meetup group.  Definitely exciting times this week!